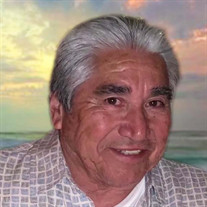 On January 7, 2022, the Armijo Family unexpectedly lost their HERO. Adrian “Tom” Armijo was surrounded by his adoring children when he passed and had many loved ones outside of the hospital. Adrian, known to many as Tom, was born in Magdalena, New Mexico on November 21, 1943 to Adela and Benny Armijo, whom he was predeceased by. Tom had seven siblings and is survived by sisters Velma, Sylvia, Trini (Yolie), and Mari and preceded in death by brothers Andy, John, and Gene. Tom and his family moved from Magdalena, New Mexico to San Pedro when he was eight years old. He attended Point Fermin Elementary, Dana Junior High School and San Pedro High School. He retired in 2013 after 50 plus years in the retail and food industry and over 40 years as a member of the United Food and Commercial Workers Union, Local 770. Tom was married to his beautiful wife Carmen for forty-nine years before her passing on January 9, 2017. Tom and Carmen had five children, Ronnie (Maria), Melisa, Adrian (Martha), Melinda, and Jonathan. Tom was called Papa by his beloved grandchildren, Adrian, Arianna, Christina, Christopher, Kristiana, Alivia, Laren Tomas (LT), Nicolas, John, and Andrew, as well as many nieces and nephews. Tom loved his family and having everyone together for the holidays. He loved laughter, dancing and being the funniest guy in the room. He loved cooking but he was known for his barbecue. He enjoyed fishing, weekly breakfast with his longtime friends and attending his Toberman Seniors Club gatherings. Although Tom will be missed by many, his family takes comfort knowing that he is reunited with the love of his life, Carmen. Together they are watching over everyone that held a special place in their hearts.

On January 7, 2022, the Armijo Family unexpectedly lost their HERO. Adrian &#8220;Tom&#8221; Armijo was surrounded by his adoring children when he passed and had many loved ones outside of the hospital. Adrian, known to many as Tom, was born... View Obituary & Service Information

The family of Adrian T. Armijo created this Life Tributes page to make it easy to share your memories.

On January 7, 2022, the Armijo Family unexpectedly lost their...

Send flowers to the Armijo family.