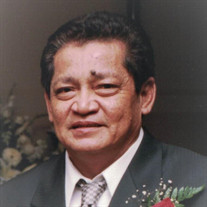 Whenever Alexes smiled, he would light up the room. His grandchildren had fun with him because he was very silly. He would make them laugh at the shocking things he would say and do. He was their Funny Grandpa! His laughter was infectious,... View Obituary & Service Information

The family of Alexes De Asis created this Life Tributes page to make it easy to share your memories.

Whenever Alexes smiled, he would light up the room. His grandchildren...