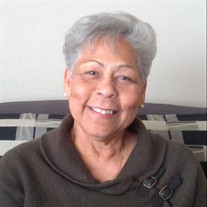 Altagracia Lourdes Brokaw, nee Perez was born on October 7,1940 in San Pedro de Macoris, Dominican Republic. She was lovingly raised by her grandparents Pedro and Maria Josefa Perez. She always told her children she was blessed to be raised by these two wonderful people who loved her like no one else. Her Tio Joaquin and his family also lived with them for some time. The blessing of this multigenerational home was the closeness she developed with her cousins whom she referred to as her brothers and sisters, most especially with the two oldest Angela and Joaquin. They stayed close throughout all these years. She also had siblings from each of her parents. As a teenager she was able to form close relationships with them, especially Violeta and Leonilda. In her early twenties Altagracia’s aunts and uncles came together to send her to the United States. It was decided that her Tia Josefa and Tio Francisco would sponsor her student visa and bring her to live with them in California. It was at their house where she met Richard, who was a longtime family friend. Although her English and his Spanish were minimal, they dated, fell in love, and married on November 21, 1964. Richard and Altagracia raised their three daughters in Huntington Beach, CA. She would do anything and everything for her daughters. She enjoyed having the time at home with them while they were growing up. She was over the moon with the birth of each of her grandsons. No one was a bigger cheerleader for them than she was. Altagracia and Richard built a strong community of family and friends. Their door was always open to visitors. Altagracia was a big personality who loved family and friends with her whole heart. She made anyone who came into her house feel special and cared for. She enjoyed entertaining and cooking. Her Catholic faith was an integral part of her life. While living in the Dominican Republic she helped with teaching the young and with her sister she helped to restore the Chapel of the Rosary, built in 1544. We would find her volunteering at church whenever she could working on food drives, visiting the homebound, and other little projects, but her passion was visiting with and ministering to the elderly. Altagracia’s other passion was painting in acrylics and oil paints. In their Huntington Beach home she painted a tropical beach mural on their bedroom wall bringing her Dominican island to California. We are blessed to have her framed paintings in our homes. During her early sixties Altagracia surprised us all by going to her favorite store, Talbot’s, and securing a job. At the time they lived across the street from South Coast Plaza, and she could walk to work. She enjoyed the work so much that when they moved to Aliso Viejo she worked at Macy’s. She also volunteered at the St Vincent de Paul Thrift Store in Laguna Hills. We should not have been surprised as she did love shopping! After she spent decades in the U.S., Altagracia thought since she had lived in the United States longer than her native country, it was time to become an official citizen. She became a naturalized US citizen on April 2,1993. After spending the majority of her adult life in California, Altagracia and Richard moved to Scottsdale, AZ in 2015. She is survived by her husband of 57 years, Richard, her daughters Mary, Giovanna, and Rosanna; her sons-in-law Dean, Domingo, and Michael; her grandchildren Adam and his wife Hunter, Matthew, Vincenzo, and Nicolas; and her great-grandson Kolbe. A Catholic funeral will be held on Friday, April 8, 2022 at 11:30 AM in the Chapel at Green Hills Memorial Park and will be followed by a grave-side service.

Altagracia Lourdes Brokaw, nee Perez was born on October 7,1940 in San Pedro de Macoris, Dominican Republic. She was lovingly raised by her grandparents Pedro and Maria Josefa Perez. She always told her children she was blessed to be raised... View Obituary & Service Information

The family of Mrs. Altagracia L Brokaw created this Life Tributes page to make it easy to share your memories.

Send flowers to the Brokaw family.