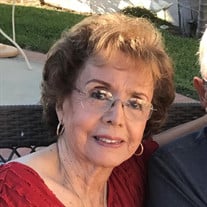 Beloved Angie M. Garnett, 93 of Rancho Santa Margarita died on December 21, 2020. Angie was brought into the world on April 14, 1927. She was born in Los Angeles, California. She was the second of five children born to Lino Carrillo and Refugio (Cuca) Cota. Angie married Richard U. Garnett in July 1952. They raised their four children in Torrance, California. Angie was a very giving and compassionate person who devoted her life to her family. She was always there to share in her children’s and grandchildren’s events, holidays, birthdays, graduations marriages, births, plays and sport games. Her faith in God has been passed to the generations she has touched. She taught us how to have a strong faith. Angie worked for Inglewood Blueprint. She left that job to work for Nissan as a Printer and Graphic Designer. Angie developed many friendships there. She enjoyed spending time with her friends. In 1992, Richard retired and they moved to Rancho Santa Margarita, California. She got involved with her new community. She joined the parish of San Francisco Solano Church and volunteered with daycare and communion. Angie also joined the senior club of Rancho Santa Margarita and became the director of trips and the club president. She also enjoyed getting to know her new neighbors and playing bunco with them. Angie enjoyed her retirement years. Angie loved to travel and explore the world. Her adventures took her throughout Europe, Mexico, Canada, Alaska and all over the United States. Survivors include her husband of 68 years, Richard U. Garnett. Her son Richard M. Garnett, son and daughter-in-law, David and Delia Garnett and her daughter and son-in-law, Donna and Vince Sardsico. Eight grandchildren: Robyn Curry, Dustin (Jess) Garnett, Christopher (Sarah) Garnett, Steven (Samantha) Sardisco, Denae Garnett, Brian Sardisco and Katie Garnett. Greatgrandchildren: Kaylee and Maxwell Garnett, Noel and Oliver Sardisco, Jaxon and Jace Garnett and Claire Curry. She is also survived by one sister, Celia Sprecher and two brothers Gilberto Carrillo and Armando Carrillo and numerous nephews and nieces. She was preceded in death by her son Dennis Garnett, and grandson Matthew Garnett, Parents Lino and Refugio Carrillo and sister Carmen Moriarty. A private service will be held on January 2, 2021.

Beloved Angie M. Garnett, 93 of Rancho Santa Margarita died on December 21, 2020. Angie was brought into the world on April 14, 1927. She was born in Los Angeles, California. She was the second of five children born to Lino Carrillo and Refugio... View Obituary & Service Information

The family of Angie Garnett created this Life Tributes page to make it easy to share your memories.

Send flowers to the Garnett family.