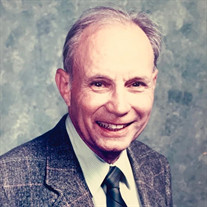 Arthur Clayton Evans, age 93, passed away on Thursday, April 22, 2021. He was blessed with a long life and always acknowledged his longevity to “The Good Lord.” Arthur was born on January 5, 1928, in Denison, TX, to Jesse and Mildred Chase Evans. Arthur was eight years old when his father Jesse died. His mother Mildred later remarried, and the family moved to Los Angeles, CA, in the early 1940s. Arthur attended Redondo Union High School and graduated in 1947. As a high school student, Arthur worked at the Fox Theater in Redondo Beach and fondly remembered meeting Bob Hope. Arthur served in the the U.S. Army 1st Calvary Division as a corporal during the Korean War and was deployed to Japan. He was very patriotic and loved his country. After serving his country, Arthur went to work for North American Aviation, which later became North American Rockwell. He worked as a planner and scheduler for the Apollo program and B1 Bomber project. Arthur loved his job and retired after 40 years in 1987. He remained active in the Rockwell Bald Eagles Retirement Association. Arthur was involved in the Elks Club and the American Legion of Foreign Wars. He enjoyed many bus trips to Laughlin, NV, with the Torrance Community senior citizens. Arthur kept abreast of everything in Torrance and was involved in the city government. Arthur was also an enthusiastic supporter of West Torrance High School football team and spent many Friday nights cheering on the Warriors as a booster club member. After his grandsons, Joseph and Ryan, graduated from UCLA, Arthur became an active fan of the ULCA Bruin football team. Arthur was fully devoted to his only child Daniel Evans (Helen) and two grandsons Joseph (Brittany) and Ryan (Melanie), and two great grandchildren, Ender and River. Arthur's greatest joy was watching his grandsons play sports. He was very proud that they had become responsible and kind young men. In addition, Arthur is survived by his nieces Lorna Balser and Kathy Mills. He is also survived by his wife Louise and stepchildren Mark Cotant and Debbie Abbate. Arthur is predeceased by his brother William Evans and sister Edna Lovold and nephew Lloyd Lovold.

The family of Arthur Clayton Evans created this Life Tributes page to make it easy to share your memories.

Send flowers to the Evans family.