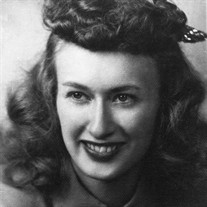 Betty Ruth Lemke, age 93, passed away peacefully on March 20, 2021 at Silverado Beach Cities Memory Care Community in Redondo Beach, California. She was born on December 10, 1927 in Moberly, Missouri to Hubert Augustus Remmert and Mable Floy (Eli) Remmert. Betty was christened soon after her birth in the United Methodist Church, located in Rural Dalton, Chariton Co., Missouri. Incidentally, her father had also been christened there and her parents had been married there. There is a long connection to Betty’s roots in that church, which throughout her lifetime she has returned to visit most every summer. She would visit old friends and any remaining relatives, who she felt loved and admired her. Betty graduated from Moberly High School Missouri in 1945 and from Kirksville State Teachers College in 1948 with a Bachelor of Science degree in Education. Thereafter she obtained her teaching credentials. She taught business and music at high schools in Northboro, Iowa, and Jonesburg and Cairo, Missouri. After a summer vacation riding bicycles throughout Europe, Betty visited her only female cousin Yvonne (Maddox) Cox and husband Bufard Cox in San Diego, California. She met her husband to be William B. Lemke (Bill), who just happened to be a neighbor of her cousin. The couple married approximately three weeks later in Bill’s Presbyterian church. The week after they married, the couple moved to reside in Giessen Germany where Bill had accepted a job to teach 8th grade elementary school for the military. They were able to meet many of Bill’s ancestors, including his paternal grandfather. After one year of teaching in Germany, they returned to California and settled in San Bernardino. There Bill taught elementary school and Betty gave birth to their three children, Teresa Ann, William David and Linda Lee. Betty also worked a year at San Bernardino High School. In 1960 the family moved to Torrance, so that Bill could begin Dental School at USC. Betty taught at North High School in Torrance, teaching Business (Accounting and Computer), typing and English. Bill graduated from USC Dental School and eventually opened his own practice. The children grew up, married and had children of their own, giving Betty and Bill 7 grandchildren (only 3 of which Bill met). After the sad and untimely death of her husband Bill in 1989, Betty soon retired from teaching in June of 1990. Betty busied her life with the recreational sport of swimming, enjoyed sewing, knitting and playing the piano, learned to square dance and joined several clubs, attended meetings of the Daughters of the American Revolution, travelled with family and friends to many foreign and domestic places, made annual visits to Missouri and Florida, continued her love of taking classes such as German, and enjoyed researching the genealogy of her family and that of friends. Betty is survived by her three adult children, Teresa Shimko, William Lemke and Linda Hobson and their spouses Tony Shimko, Nina Lemke and John Hobson. Betty is also survived by her seven grandchildren: Amanda Shimko Gschwender, Jeannie Hobson Moore, Andrew Shimko, Cole Hobson, Hunter Hobson, Denise Lemke and Daniel Lemke. Betty also had 4 great-grandchildren: Emmett, Reagan, and Laurel Moore and Easton Gschwender. Betty was a kind, warm and loving person, she will be missed by her family and everyone who had the opportunity to meet her.

The family of Betty Ruth Lemke created this Life Tributes page to make it easy to share your memories.

Send flowers to the Lemke family.