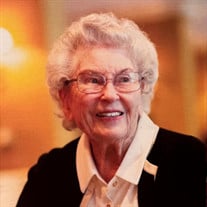 Betty Virginia Nelson passed away January 2nd, 2022 at 11:03 AM. She was surrounded by her daughter and granddaughter when she died at 97 in Torrance, California. Betty was born in a little house in Redondo Beach on March 6th, 1924. She lived in many places throughout her life, from Silver Lakes to Seal Beach, but the last place she lived was at a senior living center in Torrance, California, near her daughter and son-in-law. She passed away from old age peacefully in her sleep. Betty Nelson started her life as a Leach with three siblings. Growing up during the Great Depression meant that her family moved often. At 15, she met Ernie Nelson in a bookkeeping class. After falling deeply in love, the couple eloped in Las Vegas as soon as they were of age (though Ernie needed permission from his parents to marry her). They soon had their only child and daughter Trina. Betty worked as an administrator in an elementary school, was part of the Eastern Star association, and loved to water ski and travel. As her family grew, she also grew her community, and was known for being a social butterfly and always down for an adventure. Ernie passed away in 1997, and though Betty mourned his death, she used the new chapter of her life to travel the world, seeing the Panama Canal twice before it was closed. Her family remembers her as an avid reader, a student of life, and a deadly card shark. They will forever hold memories of her smile, love, and joy close to their hearts as they carry on her legacy into future generations. She is survived by Trina Betty O'Quinn, her daughter, William Joseph O'Quinn, her son-in-law, Christina Cummings, her granddaughter, Shawn O'Quinn, her grandson, and her four great-grandchildren.

Betty Virginia Nelson passed away January 2nd, 2022 at 11:03 AM. She was surrounded by her daughter and granddaughter when she died at 97 in Torrance, California. Betty was born in a little house in Redondo Beach on March 6th, 1924. She lived... View Obituary & Service Information

The family of Betty Nelson created this Life Tributes page to make it easy to share your memories.

Send flowers to the Nelson family.