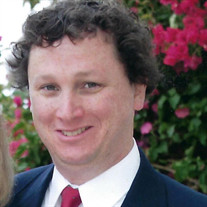 We are deeply grieved to announce that Brendan Luke O’Shea passed away at home in Rancho Palos Verdes, California on March 22nd, 2022 after an 11-year battle with small lymphocytic lymphoma. He was taken away far too soon, but we are assured – in the words of his beloved Grateful Dead – that the four winds have blown him safely home. Brendan was born in Washington, D.C. on December 2nd, 1961. He attended St. Benedict School after his family relocated to Buffalo, New York, then attended and graduated from Canisius High School. Brendan continued his education, earning a Bachelor of Arts in Computer Science from The State University of New York at Buffalo, and later a Master of Science in Computer Science from the University of Southern California. His passion for computers – and software in particular – led him to Adobe Systems, Inc, where he spent 32 years as a highly-respected Principal Software Engineer. Thanks to his talent, attention to detail and tireless work ethic, he received multiple industry awards over the course of his career. He was also the patent-holder of a groundbreaking software tool that has become a critical component of the desktop publishing industry. Brendan’s passions were not limited to screens & keyboards. A lifelong gearhead, his love of cars (especially British makes) was always apparent, but especially when wrenching on his 1973 Triumph TR6 or when blasting through Bavaria in his twin-turbo BMW 435i. Outdoor adventure always called to Brendan; it was a call he answered willingly, whether in the form of hiking, kayaking, scuba diving, bicycling (including a trip from upstate New York to Tennessee) or skydiving. An enthusiastic geocacher, he and his son Timothy found a total of 5,497 hidden caches in multiple countries. Brendan was also a licensed private pilot. A talented bread maker, Brendan’s Italian bread, bagels and pretzel rolls were the stuff of legend. And when it was time to relax, Brendan’s love of film and music (especially The Grateful Dead) ensured that the hits kept coming. Brendan Luke O’Shea was the father, brother, husband & friend that so many dream of, and we who were blessed to know him as father, brother, husband & friend are just that: blessed. He is survived by his wife Nancy, brothers Michael, Brian & Robert, sisters Clare & Annemarie, son Timothy and stepson Benjamin. A viewing will be held on Saturday, April 2nd from 9am - 1pm at The Mortuary at Green Hills in Rancho Palos Verdes, California. His family requests that, in lieu of flowers, a donation be made in his name to the charitable or educational organization of your choice.

We are deeply grieved to announce that Brendan Luke O&#8217;Shea passed away at home in Rancho Palos Verdes, California on March 22nd, 2022 after an 11-year battle with small lymphocytic lymphoma. He was taken away far too soon, but we are assured... View Obituary & Service Information

The family of Brendan Luke O'Shea created this Life Tributes page to make it easy to share your memories.

We are deeply grieved to announce that Brendan Luke O’Shea passed...

Send flowers to the O'Shea family.