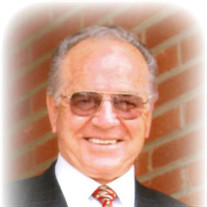 Bruno Spanjol was born June 25, 1936, and passed away peacefully October 12, 2020, in San Pedro surrounded by his loving family. He was born in Brbinj, Dugi Otok, Croatia to Petar and Milica Spanjol. He was the eighth of nine children. At the age of eight, during WW2, his family home and most of Brbinj were burnt down. He and his family became refugees and were relocated to El Shatt, a complex of refugee camps in Egypt. He told many stories about their experiences there at our family holiday dinners. Bruno was schooled in Belgrade. When he returned to Zadar, he worked as an iron worker. On October 15, 1960, he married the love of his life, Senia Kaleb, in Zadar, Croatia. They had three sons: Dennis, Anthony, and Bruno, Jr. In 1960, he emigrated to the United States where he worked as a fisherman until he became a longshoreman in 1963 with Local 13 until he retired in 1997. Bruno worked hard to provide a good life for his family. He loved going on cruises and traveling to his home in his beloved Brbinj where he enjoyed fishing, working around the house, and being with family. Bruno is predeceased by his son Dennis, parents Petar and Milica Spanjol, brothers Milenko, Slavko, and Ivan, sisters Lenka Pericin and Blazenka Pericin. Bruno is survived by his wife Senia, sons Anthony and Bruno, Jr., brother Anton (Lena) Spanjol, sisters Maria Baran and Antica Grgin, sister-in-law Terezija, brother-in-law Mirko (Milka) Kaleb, brother-in-law Dragan (Anka) Kaleb, sister-in-law Neda (Ljubo) Ikic, grandchildren Matthew, Samantha, Bruno, Michael, Sierra, and Blake, and numerous nieces, nephews, cousins, and family in the United States, Croatia, and Australia. He will live in our hearts forever. In lieu of flowers, donations may be made to the Church of Brbinj, Dugi Otok, Croatia (care of Senia Spanjol). Cryptside services will be held on Thursday, October 22, 2020, at 10:00 am at Green Hills Memorial Park, Parkview Terrace, 27501 S. Western Avenue, Rancho Palos Verdes, CA 90275. Family and friends of Bruno are invited to share their favorite photos, video memories and heart felt messages on his Tribute page on the Green Hills Mortuary Website.

Bruno Spanjol was born June 25, 1936, and passed away peacefully October 12, 2020, in San Pedro surrounded by his loving family. He was born in Brbinj, Dugi Otok, Croatia to Petar and Milica Spanjol. He was the eighth of nine children. At... View Obituary & Service Information

The family of Bruno Spanjol Sr. created this Life Tributes page to make it easy to share your memories.

Send flowers to the Spanjol family.