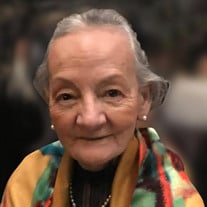 María del Carmen Isabel Ruiz Orozco, originally from Guadalajara, Jalisco, was the daughter of Rafael Ruiz Diaz, a lawyer, and Carmen Orozco de Ruiz Díaz. Carmen, as she was known, was born on November 5, 1939. She spent a happy childhood in the company of her family and attended school at the Mothers of the Holy Spirit and Reforma. After school she choose a short career in commerce, because according to her, this gave her brothers the opportunity to study longer for their careers. She had a very pleasant youth, because of her friendliness, and she had a number of good friends. At the end of her studies, she began to work at the Camino Real hotel and later at Carburo S.A. Soon afterward, she decided to immigrate to the United States in search of the American Dream. She managed to go to the United States and settle, after the usual adventures of the undocumented, and finally achieved her citizenship, which took a few years. She was employed by the El Monte-Rosemead Adult School, where she worked for 35 years until she retired. She also met the love of her life, Ralph Seline, who played a very important role in her life and in all the family. He was with her until the last moment. Carmen earned everyone's respect and consideration because she was always very kind, very loving, very brave and she held everyone in her heart. When Carmen's older sister Ana retired, Carmen received Ana very affectionately back in Los Angeles. Together they lived in Temple City, California until Ana's passing. Aside from Ralph, she is survived by her brother Rafael Ruiz and his wife Cope, her brother Juan Jose Ruiz and his wife Linda, and many nieces and nephews. We are sure she is in heaven enjoying what she has earned in this life, she was a great woman. God bless you Carmelita. Donations in Carmen's memory may be made to a charity of your choice.

María del Carmen Isabel Ruiz Orozco, originally from Guadalajara, Jalisco, was the daughter of Rafael Ruiz Diaz, a lawyer, and Carmen Orozco de Ruiz Díaz. Carmen, as she was known, was born on November 5, 1939. She spent a happy childhood in... View Obituary & Service Information

The family of Carmen O Ruiz created this Life Tributes page to make it easy to share your memories.

Send flowers to the Ruiz family.