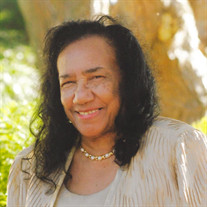 “You can’t be like everyone else”, Mom would tell her children. “The world has enough people who are rough; we need people who are tender. There are enough people who are coarse; we need people who are kind.” Celestine Marie Williams was born October 10, 1925 to Cranford Mac Williams and Mary Ann Williams in Fountain, AL. Raised by her grandparents Sylvester and Lucinda Williams in Monroeville, AL. she was the oldest of six children, five sisters and one brother. She met the love of her life at 14, and married Jesse Lee Turner in her grandparents living room a few months after graduating from high school on her 18th birthday in 1943. It was the beginning of a love story that last a lifetime. The newlyweds began their lives in New Orleans and a few years later moved to Prichard, AL. Dad built their first home and they started their family. The Turner’s joined a local congregation called The Church of God Pentecostal in 1949. Sister Celestine committed her life to the Lord and traveled throughout the South and northeast spreading the WORD OF GOD and starting new churches. She soon became a well-known Missionary who sang and taught the Word with passion. While mom was in the mission field, dad maintained the homestead, which by then included three young children: Shirley, Eugene and Geraldine. Jesse worked as a civilian employee at Brookley Fields Air Force Base in Mobile, and was offered transfers to San Antonio, TX, Alaska and Sacramento, CA. They chose neither and decided Los Angeles would be their new home. In June 1962, moved to California, got settled and dad started a position with NASA in Downey, CA. Over the course of her life, she became Mom to everyone she met who needed love and kindness. Church Mom, Neighborhood Mom, Teacher Mom, School Mom, Friends Mom, and Our Mom. Mom never lost sight of her dream to become a teacher. She applied and became a Teachers Aide at Russell Elementary School with the Los Angeles Unified School District (LAUSD) and then Librarian. She earned an Associates of Arts degree from Los Angeles City College and later completed a Bachelors in Theology. We think dad was a little surprised – but she did it! Mom would spend 27 years with LAUSD before retiring in 1997. Celestine was known for how easily she talked with total strangers, how much she loved watching Lakers basketball - Kobe Bryant was her guy – and driving fast! Mom believed every street was an open speedway. If you didn’t know Jesus before you got in the car with Mom, you were thanking Him when you got out! She had a contagious smile and laugh that made you want to join in because she seemed to be having so much fun. Throughout her life Mom maintained a sweet and simple demeanor that won the trust and hearts of many, who bore witness to her nurturing love and faith. Her signature gifts of Joy and Prayer will never be forgotten. She shaped the lives of her children, other people’s children, and demonstrated a true servants heart. On June 6, 2021 Mom closed her eyes to rest and woke up in the Light of Heaven reunited with her Beloved of 72 years, Jesse Lee. She was preceded in death by our brother Eugene, grandsons Anthony Doyle and Lovie James, Jr., her parents, and sisters and brothers: Wilhemina Williams, Edna Broughton, Robert James Tate, Frances Madison, and Millie Simmons. Mom’s memory will be cherished by her children Shirley Doyle, Gerri Ransom (Dennis), Sharon Harvey (Michael), Charlette Walker (Russell), Lovetta James Poole, Lovie James Aldridge, Lovette James Aldridge, and Darwyn Walker; 13 grandchildren, four great grandchildren, and 11 great-great grandchildren; numerous cousins, nieces, nephews, as well as other relatives, church family, and many caring friends.

The family of Celestine Turner created this Life Tributes page to make it easy to share your memories.

“You can’t be like everyone else”, Mom would tell her children....

Send flowers to the Turner family.