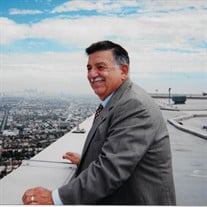 Chris passed away peacefully at his home in Rancho Palos Verdes on January 20, 2022, the day before his 86th Birthday. His final days were spent surrounded by his wife Dolores and close family. Chris was born in a tiny, one-bedroom house on the corner of 17th and Cabrillo in San Pedro, California on January 21,1936 to Tony and Evangelia Louros, immigrants from the island of Crete, Greece. He was the youngest of four siblings. He is survived by Dolores, his wife of 36 years, his children Tony (Moani) Louros, Evanne (Mark) Yackulich, Jane (Mario) Coccia, Georgia (Sal) Ferrigno and his stepchildren Edward (Bianca) Villanueva and Catherine (Art) Hernandez, his twenty grandchildren and three great-grandchildren. Chris is also survived by his sister Kay Alex and many other loving relatives. He is preceded in death by his parents, his two brothers, Mike and George, and his brother-in-law Gus Alex. A life-long resident of San Pedro/Rancho Palos Verdes, he attended Cabrillo Elementary, Dana Jr. High, and San Pedro High School, graduating in the Class of 1954. He played the violin and viola in his early years, played a little football, enjoyed hanging out at the Pirate’s Den in high school, and had many great times as a member of The Vendettas after high school. He graduated from LA Harbor College in 1957 with an AA in Engineering and from California State University, Long Beach with a BA in Mathematics and a BS in Mechanical Engineering in 1960. Chris had four children from his first marriage, Tony, Evanne, Jane, and Georgia. Chris met Dolores while she was working at the Los Angeles City Department of Building and Safety, an office he visited many times in his career. They fell in love, married a few years later, and shared the past 36 years together. Chris helped raise Dolores’ two children, Eddie and Cathy and loved them as his own. He was blessed to be called Papoo by all his grandchildren: Vanessa (Steve) Brown, Christina, Tony, and Nick Louros; Vince Louros, Nick, Chris, Alexis and Evanna Weisser, and Mark (Caitlyn) Yackulich; Tonio and Mattie Coccia; Carissa, Joey, Gregory (Andee) and Gabriela Ferrigno; Ryan and Sophia Hernandez; and Eddie and Lola Villanueva, and his great-grandchildren, Luke Lawrence, and Leo and Harrison Brown. Chris held many jobs when he was young including working in the tool room at the San Pedro Boys Club earning $1 every two weeks, delivering newspapers for the News-Pilot and the Morning Examiner, working at Breen’s Appliance, and as a gas station attendant before starting his first full-time job. Upon graduation from college, Chris spent ten years as a Mechanical Engineer at the CA State Office of Architecture and Construction, in the design of mechanical systems for state facilities including hospitals, prisons, state colleges and state office buildings. He then worked for 35 years as Director of Engineering of Real Estate with the owners and developers of Century City; ALCOA Properties, initially, then for JMB Properties Co., Premisys Real Estate Services, Tooley and Company and lastly retiring from Trammell Crow Company. His position as Director of Engineering involved overseeing the design, construction, operations and management of commercial property, including the Century Plaza Towers, Century Plaza Hotel, ABC Entertainment and the Century City Shopping Center. He retired in 2005 to spend time with his family, take trips, visit with old friends, be involved with his church and Greek community, and to have more leisurely time reading the morning newspaper. Family was very important to Chris. He was also very close to his siblings, cousins, nieces and nephews. He was the one who visited everyone, made sure to call everyone regularly, and remembered everyone’s birthday. He was instrumental in keeping family traditions alive, such as yearly Greek Easter picnics, family reunions, and gathering for all holidays and special occasions. One of the most memorable and fun traditions Chris shared with his grandkids, and any other children that were present, was passing out $2 bills. Some of his grandkids still have every $2 bill he ever gave them, and that is a big stack! He kept a list of people he prayed for and added to that list without hesitation. He was very active in the AHEPA organization in San Pedro, the Senior Citizens group at St. Katherine Greek Orthodox Church, and CSULB Alumni. Chris always enjoyed getting together with his family, participating in picnics, family reunions, every birthday and wedding, especially meeting his grandkids for breakfast near and far, going to concerts and visiting museums and churches. Chris loved to travel. He and Dolores traveled to many places including visiting his parent’s birthplace in Greece, Italy, Mexico, cruises to Alaska and South America, USC football games all over the US, visiting family in Utah, Modesto, Minnesota, and friends in Hawaii. He enjoyed watching sports on TV, playing bocce ball, playing backgammon, card games and doing puzzles. He loved reading the newspaper; the entire newspaper. Even when he had gone away on vacation, he would come home and read all the newspapers from the days he had missed. He went to every family function and gathering and never hesitated to pick up any family member or friend who needed a ride. He must have driven to LAX hundreds of times for drop offs or pickups. Chris enjoyed most Fridays meeting up with a big group of friends from SPHS for his Friday lunch group at the Pacific Diner. Chris will be greatly missed by many, but never forgotten. May his memory be eternal. The Louros family would like to offer special thanks to Moani Agard for her kindness in caring for Chris during his final weeks. Services will be held at St Katherine Greek Orthodox Church, 722 Knob Hill Avenue, Redondo Beach, 90277, with the Trisagion on Wednesday, February 9, 2022, at 6:30pm and the funeral services on Thursday, February 10, 2022, at 11am. Interment to follow at Green Hills Memorial Park, Rancho Palos Verdes. In lieu of flowers, donations may be made to St. Katherine Greek Orthodox Church.

Chris passed away peacefully at his home in Rancho Palos Verdes on January 20, 2022, the day before his 86th Birthday. His final days were spent surrounded by his wife Dolores and close family. Chris was born in a tiny, one-bedroom house on... View Obituary & Service Information

The family of Chris Louros created this Life Tributes page to make it easy to share your memories.

Chris passed away peacefully at his home in Rancho Palos Verdes...

Send flowers to the Louros family.