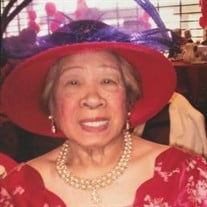 Corazon Arado Daguro was born in Milagros, Masbate Philippines to Gervacio and Victoria Arado, she was the youngest of 3 children. Cora immigrated to the US in the 1960s, and worked briefly at the Philippine Consulate General in Los Angeles, CA. Cora then met the love of her life, Eustaquio Daguro, also known as Gene. Once they married, she took care of the family and worked various jobs, which included a seamstress & dressmaker, a doll maker, and a medical supplies packer. Her last job was close to her heart as a cook in a Filipino restaurant. Cora and Gene had 5 children, Serra (Robert Sebring), Norma (Brian Coné), Coramary, Teresita (Marc Yokota) and Eustaquio Jr., also known as Aidan, (Fred Schoemehl), 5 grandchildren, Victoria, Anthony, Chitara, Daylan, and Noelani, and 2 great-grandchildren, Hunter and Harlow. Corazon was a Band Mom with the Torrance Area Youth Band. Her children played musical instruments, and it gave her the opportunity to travel with them throughout the state to many parades and band competitions. She was also involved with the Torrance Rose Float Association and was very proud to decorate award winning floats for the city of Torrance. As the children grew older, Cora and Gene enjoyed their golden years together through many activities at the Carson Senior Community Center. They enjoyed dancing, bingo and day trips to Las Vegas and local casinos. As a Member of the Friendship Club Committees, Cora entered various pageants and had been crowned Queen several times throughout the years. She also volunteered her time to the City of Carson Council Member, Jim Dear. Cora became a widow in 2002 but continued to be active up until the 2020 pandemic. COVID-19 could not keep Cora from playing Virtual Bingo with her family every week. Love knows no depths, until the hour of our separation. Our hearts are forever broken. Time flew by at warp speed. If we could only go back, even for a moment, to appreciate every second full of love.

Corazon Arado Daguro was born in Milagros, Masbate Philippines to Gervacio and Victoria Arado, she was the youngest of 3 children. Cora immigrated to the US in the 1960s, and worked briefly at the Philippine Consulate General in Los Angeles,... View Obituary & Service Information

The family of Corazon Daguro created this Life Tributes page to make it easy to share your memories.

Send flowers to the Daguro family.