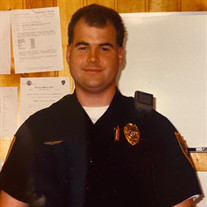 David Jerome Shawstad was born in Fargo, ND, on August 26, 1973 to Jerome “Jerry” and Greta (Magnuson) Shawstad. He attended Park Christian School, Dilworth-Glyndon-Felton, and graduated from Fargo’s Oak Grove Lutheran High School, class of 1992. During his teen years he was a member of the Moorhead Police Explorers Post where he was able to experience law enforcement hands-on. He went on to attend college, enrolling in the law enforcement program through Hibbing Technical College. He graduated in 1994. While in college, he met a nursing student, they graduated from their programs on the same day, at the same time, 30 miles apart. He was united in marriage to Karen Bismark on June 24, 1995 and out of their 9 year union came two sons. David’s law enforcement career included the departments of Fort Laramie, WY, Encampment, WY, Hillsboro, ND and finally his “dream job” in Detroit Lakes, MN where he spent 13 years. He then took a job in New Town, ND as Chief of Police for a short while prior to moving to the west coast and making his home in Rancho Palos Verdes, CA. David passed away, unexpectedly in his home on October 30, 2021. He is survived by his sons Casey Shawstad of Perham, MN, and Lucas Shawstad of Frazee, MN, one brother, Michael, aunts Diane Torrentera of Rancho Palos Verdes, CA, and Madeline Shawstad, of San Pedro, CA, Marilyn (Vernon) Heller, of Fargo, ND, and uncle Grant (Paulette) Magnuson of Moorhead, MN, as well as cousins, friends, and former LE colleagues. His deep affection for cats was lifelong and included Morris, Frisky, Springer, Jasmine, Coco, Cody, Luna, and TJ. David was preceded in death by his grandparents, Gustave and Renora (Mostrom) Magnuson, and Walter and Anna (Martindale) Shawstad, two uncles Keith Shawstad and John Shawstad, one aunt Barbara Shawstad, and his parents Greta, (in 2007), and Jerry, (in 2009). Public service was a family tradition, Jerry was a Moorhead fireman who only retired due to injury and Greta was an elementary school teacher until the time of her death. Cremation services by Green Hills Mortuary, Rancho Palos Verdes, CA. A visitation service to be held November 20, 2021 at Harvest Church, Frazee, MN from 9am-12pm with a prayer service at 11:30. A private graveside service TBD. David’s final resting place will be with his parents at the cemetery in Hawley, MN.

The family of David Jerome Shawstad created this Life Tributes page to make it easy to share your memories.

Send flowers to the Shawstad family.