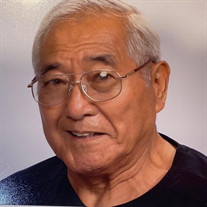 It is with great sadness that we announce that Davis Susumu Oda, 91, of Torrance, California, passed away peacefully on Sunday, July 18, 2021. Davis was born in 1929 to Mitsugi and Mitsuye Oda in Syracuse, Utah, the youngest of five children. He graduated from Davis High School in 1947. As a child Davis developed his amazing work ethic by helping his family on their farm. Growing up on a farm meant the family was required to do farm work before school, which meant getting up at 5am or earlier. This included picking tomatoes and sugar beets. In their spare time the family also worked on other farms to make extra money. Davis worked on the farm until he was drafted into the Army in January 1951, at the age of 21. He completed his basic training at Fort Lewis in Washington and was soon sent to Korea and served active duty until January 1953. Once Davis returned home, he enrolled and went to Stanford University. After completing his first year at Stanford, his family needed his help on the farm so he returned back to Utah. Davis ultimately received his college degree from Weber State University located in Ogden, Utah. Davis met the love of his life, Yoshiko Ikegami at a bazaar in Corinne, Utah and in 1955 they were married. Davis found his calling in sales and started working for Victor Comptometer in Salt Lake City, Utah. In 1971 he transferred with the company to their office in Long Beach, California. Davis’ career took the family on moves to Montrose, Colorado then Northglenn, Colorado and finally back to California when they settled in the city of Torrance. Davis ultimately retired from Warner Brothers. Davis was a strong, loyal and proud man, but above all he loved his family. If you gave him 5 minutes to talk, he would take 15 and during the conversation he would give you all the worldly advice that you could ever ask for. Davis loved sports, his teams were the Los Angeles Lakers and Los Angeles Dodgers. Baseball and bowling were a few of his favorite hobbies, but his true passion was stream fishing. Davis is survived by his wife, Yoshiko; son, Kerry Oda; daughters, Shelly (David) Oriba and Wendy Martin; son Wes (Kim) Oda; grandchildren, Taylor Martin, Brendon Oriba, Lauren (Brandon) Palmer, Alison Oriba, Shane Oda, Kendall Oda, Ryland Oda and great-grandchild Isabella Caldwell. A memorial service will be held on Saturday, August 28th at 2pm. The service will be held in the chapel at Green Hills Memorial Park located at 27051 S. Western Avenue in Rancho Palos Verdes, CA.

It is with great sadness that we announce that Davis Susumu Oda, 91, of Torrance, California, passed away peacefully on Sunday, July 18, 2021. Davis was born in 1929 to Mitsugi and Mitsuye Oda in Syracuse, Utah, the youngest of five children.... View Obituary & Service Information

The family of Davis Susumu Oda created this Life Tributes page to make it easy to share your memories.

It is with great sadness that we announce that Davis Susumu Oda,...

Send flowers to the Oda family.