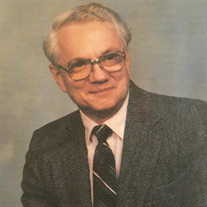 Donald Bryant Herbert passed away on February 24, 2022, at the age of 89, at his assisted living facility in Long Beach, CA. He had recovered from two broken hips in the last six months, but he did not recover from dementia. Thankfully, he died peacefully in his sleep. He is survived by his wife Ruth, daughters Heather Murrell (Terry) and Greta Stanton (Arnie), his grandson Daniel Murrell (Amy) and great-grandchildren Brisby Murrell and Corrin Murrell, as well as many nieces and nephews who lovingly refer to him as Uncle Don. Donald was born on May 4, 1932 in Cleveland, OH to Clifford and Thelma Herbert. He moved to the Los Angeles area in 1945 with his parents and his grandparents, Adelaide Mae and Bill Rowell and John Herbert. After 6 weeks and 14 flat tires, they made it to sunny Southern California. In 1950, he graduated from Canoga Park High school. In 1963, he received his bachelor's degree in Mathematics from Cal Poly Pomona. After graduating from college, he worked for General Dynamics in Pomona 1963-1968 and again in 1976-1979, Xerox Corporation from 1968-1976, and the Aerospace Corporation from 1979 until his retirement in 1994. His favorite job, though, was working at See's candy in the early 1950's. He was permitted to eat as much of the candy and nuts as he'd like while at work. He was known for having a sweet tooth; some of his favorite foods were vanilla ice cream, gingersnaps, licorice, and See's candy. During the Korean War, Donald was called up for the draft, but was rejected due to his limited sight in one eye. When they used the word “blind,” he was actually shocked; he knew that he couldn’t see as well in one eye, but didn’t realize it was that limited. Donald became a Christian as a teenager and, in 1950, met Ruth at church. They co-lead the youth group and they sang in the choir. They were married on June 25, 1957 in Culver City, CA and would have celebrated their 65th anniversary this year. They lived in Lomita for the past 53 years, and previously lived in Azusa for 10 years, and West Los Angeles for 2 years. Donald enjoyed photography, entering photos in the LA County Fair 10 years in a row, and receiving a Blue Ribbon. He also enjoyed playing Parcheesi, a family favorite; he could see ahead several moves, and often sent several other players "home" with just one roll of the dice. Donald was also an expert problem solver and a "Mr. Fix-it." He could fix anything, using just about any piece of scrap or junk lying around. As a young man, he repaired “squawks” on airplanes for North American Aviation. On the day he passed away, his favorite lamp stopped working, and is still in need of repair. One of his greatest joys was spending time with Ruth at their property in the Sacramento Mountains of Southern New Mexico. He enjoyed the beautiful scenery, as well as visiting with lifelong friends, the Buckners and Braziels. With his wife, he compiled the history of Ruth's stepfather’s (the Reverend James O. Arthur) missionary years on the Mescalero Apache Reservation, in the Sacramento Mountains; the title of the book is Yah Et-te. Visitation will be held on Monday, March 7th from 4 to 8 p.m. and a graveside service will be held on Tuesday, March 8th at 10:00 a.m. at Green Hills Memorial Park, 27501 South Western Avenue, Rancho Palos Verdes, CA 90275.

Donald Bryant Herbert passed away on February 24, 2022, at the age of 89, at his assisted living facility in Long Beach, CA. He had recovered from two broken hips in the last six months, but he did not recover from dementia. Thankfully, he... View Obituary & Service Information

The family of Donald Herbert created this Life Tributes page to make it easy to share your memories.

Send flowers to the Herbert family.