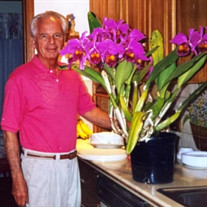 Donald Dean Von Sprecken peacefully passed away on January 24, 2022 surrounded by family. He was 92 years old. Donald was born on March 3, 1929 to Gustav and Lillian Von Sprecken on a small farm in Onslow, Iowa. He had two brothers — Reimer, who was 5 years older, and Orvin, who was 5 years younger. The family moved to a larger farm in Wyoming, Iowa when he was 10 and then on to Wisconsin, where he attended a one-room school. The family got their first taste of city life when they moved to Red Wing, Minnesota. When Donald was 15, the family moved to Hawthorne, California for employment opportunities. There Donald attended Leuzinger High School, where he was active in student government; helped create the Gunga Den, a cool hangout where kids could listen to jazz music and dance; played baseball while coaching younger children; and worked part-time in the deli section of Ross Market. Shortly after graduating from high school, Donald enlisted in the Air Force, serving his country for 4 years. This is something of which he was extremely proud. He served in England, Japan, and Guam before receiving an honorable discharge. Donald married Helen Andrea Fortin in 1954 in Las Vegas. They were married for 67 years, until his passing. Their love and commitment to each other was truly inspirational. They had two daughters, Debra and Diane. Donald obtained an Associate of Arts Degree from El Camino College; a Bachelor of Arts Degree from Long Beach State University; and a Master of Arts Degree from the University of Southern California. While his original career aspiration was to become an attorney, Donald decided to become a Probation Officer after meeting with a recruiter at Long Beach State. This was a career about which he remained passionate. Donald worked for the Los Angeles County Probation Department for 28 years, during which time he consistently promoted to higher positions. One of his career highlights was becoming a Campus Recruiting Coordinator in 1964, which required him to travel to universities throughout the United States. Probably the most momentous experience of his career with the County was his prominent role in the creation of the Juvenile Justice Center in South Central, which was the first in the nation to bring 11 juvenile justice system agencies together “under one roof.” Donald appeared in newspaper articles and on the radio and television to share information about this innovative concept. Following his retirement from the County, Donald joined the United States Probation Department, where he worked in Pretrial Services for 10 years. Throughout his life, Donald pursued many interests and hobbies. With a group of friends, he and Helen purchased a racehorse, Reb’s Bay, who won may races at Los Alamitos. Having spent many vacations in Palm Desert, they eventually purchased a second home there, where they enjoyed relaxing with family and friends. Donald was an excellent cook and baker and took pleasure in discovering new recipes to which he added his own special ingredients. He delighted in sharing his creations with others. Donald also possessed quite the green thumb, growing breath-taking orchids in his green house, as well as gorgeous flower and vegetable gardens. Having enjoyed fishing since childhood, Donald pursued many fishing excursions with his friends, grandsons, and great-grandsons. He also built bird aviaries, raising canaries and a variety of finches. Jazz was his preferred music, his favorite singer being Frank Sinatra. He delighted in the theatre and concerts and often treated his family to these experiences. Donald greatly enjoyed traveling with his family and several friends, his favorite destinations being Hawaii and New England. He loved nature and animals. His pets included miniature dachshunds Schnapsy, Donka, Gretchen, and von Rhett. He appreciated the sport of football, the USC Trojans being his favorite team. Donald Von Sprecken has been described as a hero, leader, philanthropist, mentor, and dear friend. He was a caring and loving husband, father, grandfather, and great-grandfather. He was magnanimous, donating to many charities and causes. He was truly an inspiration to anyone who had the fortune of knowing him. Donald is survived by his wife, Helen; daughters Debra and Diane (Mike); grandchildren Michael (who preceded him in death by 4 days); Matthew; Diane (Jason); Lisa; Robert; and Christie (Edwin); great-grandchildren Justin, Nicholas, Hayley, Adriana, Ayden, Kristina, Hannah, and Audrey; brother Orvin; and 8 nieces and 2 nephews. In lieu of flowers, please consider honoring Donald by contributing to the charity that was dearest to his heart, Children’s Hospital of Los Angeles, through the following link: http://connect.chla.org/goto/donaldvonsprecken.

Donald Dean Von Sprecken peacefully passed away on January 24, 2022 surrounded by family. He was 92 years old. Donald was born on March 3, 1929 to Gustav and Lillian Von Sprecken on a small farm in Onslow, Iowa. He had two brothers &#8212;... View Obituary & Service Information

The family of Donald Dean Von Sprecken created this Life Tributes page to make it easy to share your memories.