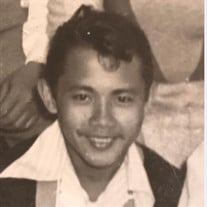 Edmund “Eddie” Atienza Arnado, 87 of Carson, California passed away peacefully at his home in the presence of family and our Lord and Savior Jesus Christ on January 18, 2022. Eddie was born in the Philippines on December 17, 1934, to Mercedo and Caroline Arnado. He had seven siblings, three brothers and four sisters. As a teenager, Eddie and his family moved from the Philippines to San Francisco, California, then later to Lompoc, California, finally settling in Los Angeles County. At the age of 17, Eddie joined the Airforce and was stationed at Johnson Air Force Base near Waco, Texas. This is where he met the love of his life, and it all began… While Eddie was working as a Medical Assistant at the Airforce Base in Texas, he met Angelina “Angie”. They fell in love, and not long after, married and moved to California to start a family. As a family, they enjoyed many activities including bowling, camping, and fishing. Eddie worked in the Aerospace Industry making and designing fasteners. He was a Senior Tool and Die Maker Machinist, specializing in working and training on the Electrical Discharge Machine (EDM) at Hi Shear Corporation in Torrance, California. Eddie was a dedicated employee with over 30 years of service before he retired. Eddie was respected and liked by his managers and peers within the company and industry itself. He was even more dedicated to his wife and children. Eddie strived to be a dependable, supportive, loving husband, as well as a strong father, mentor, counselor, and friend to his children. It was of the utmost importance to provide these things, and he certainly did not disappoint. He accomplished all he set out to and lived a full and happy life. Eddie is survived by his loving wife of 63 years and their five children: Danilo Arnado (Jacki), Regina Dyer (John), Edward Arnado, David Arnado (Deborah), and Alfred Arnado, who blessed them with eight grandchildren: Lisa Arnado, Bryan Arnado, John Dyer, Jeremy Dyer, Daniel Arnado, Allison McAleenan, Ariel Richter, and Vincent Arnado, as well as four great grandchildren: Troy Arnado, Isabella Dyer, Mia Richter and Caleb McAleenen. Eddie is also survived by his sisters, Lilly Braff, Violet Wautlet and Melita Darin, and brother, Carlos Arnado. Preceded in passing by his mother, Caroline Arnado, father, Mercedo Arnado, son, Michael Arnado, brothers, Johnny Arnado and Rudy Arnado and sister, Carmen Nicio. A celebration of Life service has been scheduled for April 10, 2022 at Green Hills Memorial Chapel. In lieu of flowers, it was Eddie’s wish that donations be made to Torrance Memorial’s Hospice Program in honor of their tender care to his son, Mike, and loving support to the family.

Edmund &#8220;Eddie&#8221; Atienza Arnado, 87 of Carson, California passed away peacefully at his home in the presence of family and our Lord and Savior Jesus Christ on January 18, 2022. Eddie was born in the Philippines on December 17, 1934,... View Obituary & Service Information

The family of Mr. Edmund Arnado created this Life Tributes page to make it easy to share your memories.

Send flowers to the Arnado family.