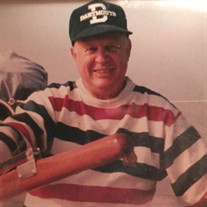 Private Services will be held. It is with great sadness we announce the passing of Emmett Francis Stewart. Emmett was born on February 5, 1937, in Enfield, NH to Emmett and Gladys Stewart, the son of a Judge and school Teacher. Emmett had 3 siblings; Janet Knowles, Ellie Volpe, and John Stewart. Emmett graduated from Enfield High School and went on to attend Plymouth State College in NH. He began his professional career as a teacher and coach in NH and later moved to California in the 1960's. He continued his professional career in education working for Los Angeles Unified School District as teacher, Guidance Counselor and Administrator. He married Rosario E. Estacio in 1967 and had 2 children Kristi and Stacey and resided in San Pedro, CA. Together they discovered San Francisco, which began the love for the city and after retiring he would split his time living in San Francisco and Southern California. Emmett had many hobbies and was an avid reader. He enjoyed traveling, cycling, sailing, walking and any other adventure he could participate in. Emmett had a heart caring for others and was an active participant in AA sponsoring many individuals and speaking at various locations on the matter. His volunteering also extended to Feeding the Homeless. He was a person who would help anybody in need, and had a genuine force of unconditional love in the lives of his family and friends. Emmett would make it a point to speak with his siblings on every other day, if not daily. Emmett had a special bond with his sister Ellie Volpe, which he called his soulmate, the love they had for one another was incredibly special. Emmett also gained a brother by marriage Thomas Volpe in which they held a unique bond. A special friend to Emmett was Paul Regan whom they shared a childhood friendship of 73 years and shared many adventures together. He also held close relationships with his nieces and nephews and also called them frequently. Over the course of his life he met Perla Harlick, which they shared their own adventures whom remained together until his passing. Everybody loved Emmett, he lived life to its fullest with impeccable mind and spirit. He is preceded in death by his parents Emmett and Gladys, sister Ellie Volpe, and nephew Stewart Volpe. Emmett is survived by his sister and brother, Janet Knowles of North Hampton, NH and John Stewart of Derry, NH: brother in law Thomas Volpe of Laconia, NH, his children Kristi Mandravellos and Stacey Erosa; son-in-laws Tony Mandravellos and Michael Erosa; grandchildren Anthony Mandravellos, Andrea Erosa and Michael Emmett Erosa; nephews and nieces William and Xiaohui Geng, Barry and Scott Knowles, Christopher Volpe and Lauri Ann Stone, Lynn Aslin and Carole Stewart and long time companion Perla Harlick, her daughter and husband Tiffany and Dustin Hall, their children Hunter, Crossten, Cannon, and Cela Roz. His love will be remembered and treasured for generations to come. Private services will be held at Green Hills Mortuary 27501 S Western Avenue Rancho Palos Verdes, CA 90275 on 12/19/20. Friends may leave an online condolence at https://urldefense.com/v3/__http://www.greenhillsmortuary.com/obituaries/Emmett-Stewart/__;!!JYP6xId3!s7TpNIRRKOlrLrjOpIX2bkiuu3Pb9cmajkOkA2_dLWocIjzQZTLmtr7UZ5QwMqZAe2W35fU$ .

Private Services will be held. It is with great sadness we announce the passing of Emmett Francis Stewart. Emmett was born on February 5, 1937, in Enfield, NH to Emmett and Gladys Stewart, the son of a Judge and school Teacher. Emmett had... View Obituary & Service Information

Private Services will be held.

Private Services will be held.

It is with great sadness we announce...

Send flowers to the Stewart family.