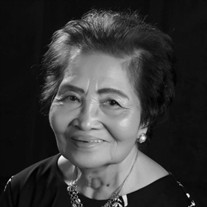 Erlinda Cordova Yuson’s Life and Legacy Erlinda Cordova Yuson, 86 years old, passed away on January 16, 2021 with all her children surrounding her. Funeral services will be held at Green Hills Memorial Park in Palos Verdes, CA on March 2nd with Pastor Jimmy Chaney officiating. Interment will then follow at the Churchyard in the park. Linda as she was called by her family and friends was born in Barotac Viejo, Iloilo Philippines on March 2, 1934 to the late Candido and Loreto Cordova. She was the oldest of 9 children and was a lot of help to her mother after her father passed away when she was in her early teens. Education was important to her and even though the family was not wealthy, she was able to attend well known prestigious schools through academic scholarships. She graduated high school at Adamson University and then got accepted to Nursing school at the University of the Philippines. After passing the National Nursing Board exam she was recruited to work as a Public Health Nurse in Manjuyod, Philippines because of her exemplary academic record. While there, she met the love of her life, Zoilo Yuson. They married on January 4, 1958. After having 5 children and when the youngest was only 6 months old, she had a strong desire to go back to school and get a degree in Pharmacy. When she took the National Pharmacy Board exam in 1969, she was recognized for having the ninth highest score that year. She bore 3 more children after that during the prime of her career. They encouraged and made sure all eight children obtained a college degree. The couple settled in Tanjay, Philippines where they successfully started and managed two family-owned drugstores for 20 years. Zoilo and Linda sought better opportunities for their children and moved to the US in 1990 after two of their children had previously done so. They were later able to immigrate their six remaining children and encouraged all of them to make the most of the opportunities available in the US. As immigrants, they adapted to a new way of life in a foreign country. They worked hard to make sure their basic needs and more were met. Linda started work as a medical assistant in a clinic and later advanced to being a Director at an Adult Day Center. Linda retired in 1998 to care for her husband who passed away in 2003. For the past 18 years she devoted her time to be close to her children whom she loved dearly. She cherished moments spent with all her children and their families and she always made sure the occasion was captured on film. She offered unbiased advice when asked. She always used examples of both struggles and accomplishments through her life’s journey to show how those experiences made her stronger. One of her favorite mottos was: “If there’s a will, there’s a way.” She enjoyed listening to music and would often dance or sway as if no one was watching. Elvis Presley was one of her favorite singers. She also liked Frank Sinatra, including his song My Way which depicts how she traveled through life. Her marriage and love to her husband was exceptional and an envy to many. She cared for herself and made sure that her face was appropriate when she was out in public. Gatherings with family and friends were important to her and she loved to mingle with crowds. Within the last several years she attended Carson Adult Day Center and looked forward to being with her friends and the socialization it offered. She never met a stranger. Many will remember her as the petite soft spoken, sweet lady with the beautiful smile. She was always generous to her family and anyone with a drive and desire to make their life better. Her perseverance to make it through life’s obstacles was a powerful trait that her children acquired and will strive to continue. She was a great example to those now missing her! She loved God and always made a point to spend time with Him through church services, prayers, kind deeds and thoughts. She always reminded her children and everyone around her to pray and trust God because He is the most Powerful One. She regularly attended the Church of Beach Cities in El Segundo, CA. Linda is preceded in death by her parents, her husband, and 3 brothers: Elmo Cordova, Elmer Cordova, and Edson Cordova. She is survived by 8 children: Margery (Ronald), Yvonne (Alex), Sherry Lynn (Cristino), Russel June (Jane), Zoe Lynne (Mike), Florabelle (Henry), Kristine (Sam), and Jennifer (Eddie); 3 brothers: Eddie, Edmund, and Edwin, 2 sisters: Evelyn and Lorie, 16 grandchildren, 2 great grandchildren, several sister in-laws and 1 brother in-law, numerous nieces and nephews, as well as numerous other relatives and friends.

The family of Erlinda Yuson created this Life Tributes page to make it easy to share your memories.

Send flowers to the Yuson family.