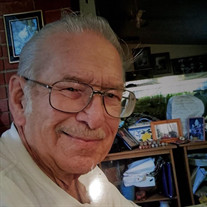 Ernest Lee Beck was born May 30, 1928 to Laurine (Munn) Beck and Ernest Thurman Beck at Torrance Memorial Hospital. He would go on to live his entire life in the South Bay area. Ernest was called Bill by his family and Ernie by his friends. He was the oldest of three with a brother, Robert Beck and a sister, Suzanne Beck. Ernie graduated from Redondo Beach High School and went on to receive a BS degree in Engineering from UCLA. After graduating from UCLA, Ernie went to work for McDonnell Douglas as an aerospace engineer. He worked there for nearly 38 years. While at Douglas, Ernie worked on the flight control systems for the A-4D (the plane used by the Blue Angels), the MD Super-80, and DC-10 among other projects. Although he secretly hated to fly, Ernie was part of the Douglas accident investigation team and travelled to various places like the Canary Islands to investigate airline accidents. Ernie met the love of his life, Nancy Lyons, at a holiday party in 1956 and married her shortly thereafter on March 28, 1957 in Las Vegas, Nevada. He and his new bride bought a house on 184th Street in Torrance, where they would go on to live 60 happy years together. They even kept the same phone number. They raised four children: Linda, Karen, Bill, and Jim. Ernie coached AYSO soccer, Little League Baseball, and always supported his children in their activities. Ernie loved to fish. Every summer he took his family up to Klamath, CA so the fishermen could fish for salmon at the mouth of the Klamath river. He always went the last two weeks of August and the first week of September, because that's when the fish ran. He loved the redwoods. He loved smoking salmon and making blackberry jam. He even tried his hand at making blackberry wine. Ernie was a creature of habit. Thanksgiving week was always spent at Lake Mojave, NV fishing for rainbow trout. Easter week was spent at Graham Cracker Cottage in Running Springs, a big old cabin that a friend of his owned. Ernie loved to read romance novels. So did Nancy. His children joke that they kept Harlequin in business. He liked watching any and all football games on TV. He loved working jigsaw puzzles and often had one going, both in the trailer on vacations and on the kitchen table at home. After a heart attack, Ernie started walking. He and Nancy would go walking at a local park, which started decades of walking and visiting with friends they made along the way. He used to walk 4 1/2 miles around the park, always carrying a pocket full of dog biscuits to give to the dogs at the park. Their walks spawned another tradition, Sunday brunch at the Sizzler with their good friends Edie and Nadine. Ernie loved to get his Egg Beater omelets and a glass of champagne. Ernie was preceded in death by his parents, Laurine (Munn) Beck and Ernest Beck, his brother Robert Beck, his sister, Suzanne Beck; his wife of 60 years, Nancy (Lyons) Beck, and two grandsons, Nathaniel Kerns, and Stephen Beck. He is survived by his children, Linda (Neil) Friedman, Karen Kerns, William (Louisa) Beck and James Beck; grandchildren Rebecca Kerns, Jason Kerns, Jacob Kerns, Sarah (Kerns) Gullett, Christina Beck, Bryan Beck, Molly Beck, and Aaron Friedman; great grandchildren, Bethany Baker, Samantha Baker, Sebastian Baker, Vincent Baker, Gaige Kerns, Landon Kerns, Leia Kerns, Bryan Kerns, Josie Kerns, Rylee Beck, Wyatt Beck; and great-great grandson, Atticus Baker. A graveside service will be held for Ernest at Green Hills Cemetery on Monday December 21, 2020 at noon.

Ernest Lee Beck was born May 30, 1928 to Laurine (Munn) Beck and Ernest Thurman Beck at Torrance Memorial Hospital. He would go on to live his entire life in the South Bay area. Ernest was called Bill by his family and Ernie by his friends.... View Obituary & Service Information

The family of Ernest Lee Beck created this Life Tributes page to make it easy to share your memories.

Send flowers to the Beck family.