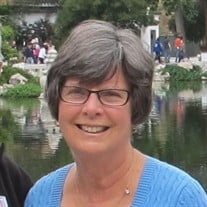 Frances Little Booth was born in Springfield, Ohio on August 7, 1943, and passed away on January 18, 2022, in Torrance, California. She attended Julienne High School,, followed by obtaining her B.A in French from the College of Mount Saint Joseph, graduating magna cum laude. She pursued her focus in French while at Purdue University earning an M.A. In 1968, she spent a year at the Université de Caen where she pursued an independent study curriculum. In 1965, Fran earned her M.S. in MFCC at CSU Dominguez Hills. Excelling in academics, in 1965 she had been invited to join Kappa Gamma Phi, a Catholic Woman’s Scholastic Honorary. Immediately after her 1968 return from France, Fran married Thomas Booth in Lafayette, Indiana. While living in Indiana, Fran taught English and French at Purdue, West Lafayette High School, and IUPUI. Ultimately, Fran taught for over 30 years in high school, community college, and university. Over the years, Fran was a Cochise Elementary School representative to the Scottsdale Arts Council, a Community Helpline volunteer, and a catechist teacher for the confirmation program as well as a Stephen Minister at Saint John Fisher Church. Fran and Tom were married for 54 years, during which time she was a devoted, loving mother to Christopher and Jennifer Booth and daughter to her mother Mildred. She will be missed by her family and her many friends in Indiana, Arizona, California, and Europe. Fran’s funeral will commence with a viewing at Green Hills Memorial Park from 9:30 to 11:30 AM on February 17. There will be a funeral mass at St. John Fisher Church at 1 PM on February 17. Both events are in Rancho Palos Verdes. In lieu of sending flowers, please make a contribution in memory of Fran (Frances L. Booth) to the American Heart Association, P.O. Box 840692, Dallas, TX 75284.

Frances Little Booth was born in Springfield, Ohio on August 7, 1943, and passed away on January 18, 2022, in Torrance, California. She attended Julienne High School,, followed by obtaining her B.A in French from the College of Mount Saint Joseph,... View Obituary & Service Information

The family of Frances Little Booth created this Life Tributes page to make it easy to share your memories.

Frances Little Booth was born in Springfield, Ohio on August...

Send flowers to the Booth family.