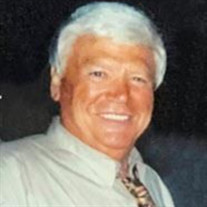 Frank Edwin Bechtolt passed away peacefully at his home on April 6, 2022 at the age of 85. Born in Astoria, Oregon in 1937, Frank excelled in every endeavor from a very early age. Winner of the distinguished American Legion School Award, member of the Columbia Chapter of the National Honor Society of Secondary Schools and winner of the top award from the Mathematics Association of America, Frank also served as both student body president and vice-president of his Astoria High School class. He was a star athlete, lettering in both football and basketball and was captain of the varsity basketball team his senior year. That same year he was awarded the Rotary Scholarship for being an “exceptional student academically and in extra-curricular student affairs”. Frank studied Mathematics and Civil Engineering at Oregon State University before enlisting in the U.S. Army where he served most of his tour in Italy playing basketball for the 1st Missile Battalion, 82nd Artillery team. Typical of Frank, his “outstanding conduct, appearance and superior military bearing” earned him Soldier of the Month in November 1960. Honorably discharged in 1965, Frank returned to Astoria and pursued a career in the dredging industry, a career that would span nearly 50 years. Along the way he earned his captain’s license and in 1968 saved a young boy from drowning for which he was awarded the American National Red Cross Certificate of Merit. Multiple dredging projects along the Pacific Northwest coast eventually brought him to Southern California where he settled and joined the Manson Construction team. He retired from Manson in 2014. Frank was preceded in death by his dear wife Marlene, his brother Warren and sister Ellen and two nephews, James and Mike. He will be greatly missed by daughters Dawn Robillard and Tracey Barker (Tom), step-daughters Kimberly Phillips (John), Michele Anderson Decker (Tom), Raquel Arman (Joel) and grandchildren Nicholas, Bryan, Matthew, Alexis, Beau and Joel Jr. He was a very beloved uncle to five Bechtolt kids, Warren Jr., Cary, Scott, Steve, and Stacey and five Fields children, James, Vicki, Debbie, Mike and Bobby. He was also loved by 13 great-nephews and nieces, Joel, Justin, Jona, Haley, Rachel, Sophie, Carleigh, Emileigh, Kimberleigh, Brennan, Brittany, AnnMarie and Emily and nine great-great-nephews and nieces Haley, Sidney, Conrad, Valerie, Sadie, Lincoln, Wally, Brewer and Brady. Frank loved life and we will be celebrating his on Friday, May 13, 2022, 11:30 am at the Green Hills Mortuary & Memorial Chapel, 27501 South Western Avenue, Rancho Palos Verdes, CA 90275. Livestreamed on 13th May from 11.15am to 12.45pm LOGIN PAGE: https://www.oneroomstreaming.com/login EMAIL: [email protected] PASSWORD: TPYKUF

Frank Edwin Bechtolt passed away peacefully at his home on April 6, 2022 at the age of 85. Born in Astoria, Oregon in 1937, Frank excelled in every endeavor from a very early age. Winner of the distinguished American Legion School Award, member... View Obituary & Service Information

The family of Frank Bechtolt created this Life Tributes page to make it easy to share your memories.

Frank Edwin Bechtolt passed away peacefully at his home on April...

Send flowers to the Bechtolt family.