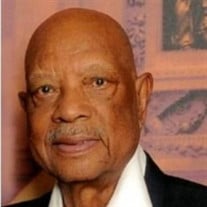 Frank Brown was born on October 19, 1930 in Mississippi. He was the fourth of the five children to the union of Richmond and May Bell Brown. He spent his early years in Mississippi and subsequently moved to Warren, Arkansas. There he received a delayed birth certificate. When Frank was 15 years old he moved to Los Angeles, California where his older brother Willie was living. Frank attended Jefferson High School, home of the Democrats where he started at point guard for the legendary coach Hanson. After high school, he attended East Los Angeles College for one year and then joined the United States Air Force in 1951. He served four years, assigned to an AF basketball team, traveling in Europe. He returned to Los Angeles where he started working for the City of Los Angeles in the Sanitation Department. In addition, he attended barber school and worked in the family Brown's Barbershop on Manchester in Los Angeles. In 1969, Frank married Gwen Applewhite and moved to Carson with their four boys. Carson was their home. For a time Frank continued working with his brothers Willie and Louis (Bunny) at Brown's Barbershop on Manchester in Los Angeles. He eventually started barbering at Doug Out's Barbershop in the City of Carson. In Carson he started coaching baseball and football at Victoria Park and did that for 15 years. These were special years where he was able to mentor, guide, and direct the youth in the Community of Carson. For over 40 years all those young boys he coached grew up and brought their sons and their son’s sons to Frank Brown for a haircut and life coaching. In 1986, Gwen came up with a great idea to move to San Pedro (Frank was initially opposed). The boys had grown up by this time, had their own places and were starting families of their own. Rod was 21, married soon after and found his own place. San Pedro became home for the grandkids. In 1987, Frank decided his time with the City of Los Angeles had come to an end. As a result, he and Gwen decided to explore the world. They visited six of the seven continents traveling with Blue World's Festival At Sea all around the Caribbean and Friends of Festival at Sea all around the world. During these years, Frank enjoyed spending valuable time with his grandchildren. He cherished his time with each one of them. His commitment to family was displayed by him sponsoring his grandchildren to attend all of the Brown family reunions since 1990 (registration, airfaire, and hotel until they were 21). Frank Brown lived to the ripe old age of 90th where he enjoyed a fruitful and successful life. He was preceeded in death by his parents and son Lance Chilton Applewhite, his brothers Willie Brown, Nathaniel Brown, and Louis (Bunny) Brown and sister Evelyn Marie Brown Bloodsaw. He is survived by Lillian Gwendolyn Brown (wife of 51 years) of San Pedro, CA.; three sons: Randy D. Brown (Kotheldra) of Carson, CA., Gregory V. Applewhite (Kamiko) of Signal Hill, CA., and Rodney G. Brown (Kimberly) or Carson, CA.; Six grandchildren – RaVaughn Brown, Marquise Brown, Rhyon Brown, Kendall Brown, Lance Applewhite and Ashley Applewhite. Also mourning are the families of the Brown Gardner Hooper Wells (W&E Brown Collective) and especially Willie B. Green, along with dear and life long friends, mentees, and associates. A Service will be held at Green Hills Memorial Park on November 13th at 12PM. Family and Friends who wish to view from home, can do so at the following link: https://client.tribucast.com/tcid/83622542

Frank Brown was born on October 19, 1930 in Mississippi. He was the fourth of the five children to the union of Richmond and May Bell Brown. He spent his early years in Mississippi and subsequently moved to Warren, Arkansas. There he received... View Obituary & Service Information

The family of Frank Brown created this Life Tributes page to make it easy to share your memories.

Send flowers to the Brown family.