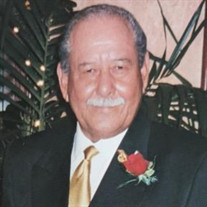 Frank Peña Gutierrez December 1, 1928 – January 30, 2022 He was born in Maysfield, Texas to Canuto Gutierrez and Dolores Peña and was one of six siblings. His family moved to Cameron, TX and eventually to Lubbock, Texas. While he initially only attended school until the 8 th grade, he later earned his GED in California. He always loved learning and later was able to earn his real estate license. Frank was incredibly hard working and began working at the age of 8 years old to help his family. He held many jobs early on from working in the cotton fields, baker, security guard, restaurant owner, and real estate agent. He loved baseball and played on the Black Hubbers of Lubbock. He would later go on to coach his sons’ baseball teams and buy season tickets to his favorite team, the Los Angeles Dodgers. As a teenager he regularly attended a church youth group for Mexican teenagers in Lubbock. It is here where he met his wife of 50+ years Guadalupe (Lupe) Garcia. They met in 1946 and fell in love. They eloped in 1947 when he was 19 and she was 16. Frank and Lupe had three children in Lubbock, Frank Jr., Carlos, and Maricella (Linda). In 1961 they moved to Carson, California where their youngest child, Julie was born. He was employed by General Motors as a security guard. He always worked the graveyard shifts so he could help with his family and pursue other entrepreneurial ventures. Frank and Lupe opened Lupita’s Mexican Restaurant in 1968 in Carson as take-out only, which later expanded to a full restaurant. As the restaurant became more successful, they were able to provide better opportunities for their family. Frank became well known in the local community and affectionately known as “Don Pancho”. He enjoyed helping others and was knowledgeable on many things and could always have a conversation with anyone. Frank and Lupe loved to travel as well as throw parties at their home. They were the life of the party and known as a power couple in the local area. They loved going to Mexico, Las Vegas, and Palm Springs. His family is grateful to him for all of his love and dedication. They will continue his legacy and always celebrate his life and the impact he had. Frank is survived by three of his children Frank Gutierrez Jr., Carlos Gutierrez, and Linda Ramirez, 10 grandchildren, and seven great-grandchildren.

Frank Peña Gutierrez December 1, 1928 &#8211; January 30, 2022 He was born in Maysfield, Texas to Canuto Gutierrez and Dolores Peña and was one of six siblings. His family moved to Cameron, TX and eventually to Lubbock, Texas. While he initially... View Obituary & Service Information

The family of Frank P. Gutierrez created this Life Tributes page to make it easy to share your memories.

Send flowers to the Gutierrez family.