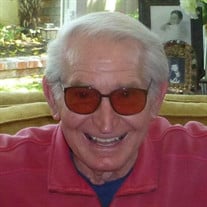 George J. Cassell, 90, of Huntington Beach, passed away on September 24, 2020 after a year long battle with cancer. George was born on May 25, 1930 to George H. and Jewel M. Cassell in Keystone California. After graduating from Banning High School in 1947, he first went to Compton Junior College, then enlisted and served in the Air Force, before continuing to earn his Electrical Engineering degree at UCLA. In 1954, he married his high school sweetheart, Nancy Joan Snyder. They started their marriage in Long Beach and had two children, Mark and Marti and then moved to Huntington Beach in 1966. George worked at McDonnell Douglas for over 30 years, where he met lifelong friends and received important patents that are still used on aircraft today. George retired early so he could spend time with, travel with and care for his beloved wife. George loved to spend time with friends and family. Whether it be going on a cruise or to a sporting event, traveling or having a party, playing ping-pong or shuffleboard, skiing, or riding roller coasters, he always invited others to join in; everyone was welcome. Anyone who knew George knew that he was a devoted and loving husband, father, son, brother, uncle, and grandfather. He spent years lovingly and meticulously caring for ailing family members. Family meant more to him than anything else in the world. He was unendingly proud of his grandchildren, attending every game and event – always providing words of encouragement regardless of outcomes. George was predeceased by his wife Nancy, his son Mark and sister Jewell Anne. He is survived by his daughter Marti Cassell-Fix, son in law Robert Fix and two grandsons Brendan and Nathan Fix. In lieu of flowers please consider remembrances to the American Parkinson’s Disease Association (www.apdaparkinson.org).

George J. Cassell, 90, of Huntington Beach, passed away on September 24, 2020 after a year long battle with cancer. George was born on May 25, 1930 to George H. and Jewel M. Cassell in Keystone California. After graduating from Banning High... View Obituary & Service Information

The family of George Cassell created this Life Tributes page to make it easy to share your memories.

George J. Cassell, 90, of Huntington Beach, passed away on September...

Send flowers to the Cassell family.