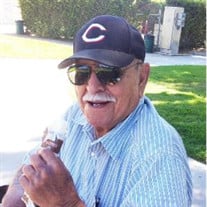 Gilbert Acebedo was born in Wilmington, California (he called it “God’s Country”) on October 19, 1925 and passed away at the age of 95 years young on January 18, 2021 at Torrance Memorial Hospital in Torrance, California. Gilbert, affectionately known as “Pops”, “Grandpa” and “Grandpa-gramps” was the second youngest child born to Robert and Josie Acebedo. He is survived by his sister Ora and is now chatting it up having his coffee and donuts in heaven with his other siblings who passed before him Rudy, Mimi, Virginia and Irene. Gilbert attended schools in Wilmington and Long Beach and resided most of his life at his home in Carson, California. He served in the military as a Merchant Marine and traveled the world delivering supplies to WWII troops in places like Italy and several ports in the South Seas. He had a tremendous work ethic from the time he was shining shoes as a kid at the Long Beach Pike until he retired as a shipyard welder. He often told stories of working on a ship crossing the Equator and passing through the Panama Canal. After his time in the service, Gilbert met his “Honey Bunny” Violet Cordova and they were married on June 3, 1951 in Ensenada Baja California. They have two beautiful and loving daughters, Cindy and Cissy. His proudest joy were his grand kids and great-grand kids. Cissy kicked off the grand kid family tree with Ruben and Joanne. Cindy followed with Bobby, Matthew and Casey. He loved his grand kids and was happiest when he was watching them play sports and was the proudest grandpa at every graduation. As much as he loved his daughters and grand kids, he cherished the time he had with his great-grand kids Madison, Tessa, Tristan, Eric, Evin and Blake. Gilbert was an avid life-long Dodger fan and loved watching “those bums” on TV and attending the occasional game at Chavez Ravine. His dodger-blue legacy lives on in the memories of those of us who were blessed to be able to watch a game with him and anyone who just had the privilege of hearing one of his many dodger stories. He also loved to play golf and for many years was part of the infamous “Dawn Patrol” at Harbor Park Golf Course in Wilmington. It was there that he proudly introduced his son Manuel to the game. Gilbert’s enjoyment and passion for golf lives on every time his family members tee it up. Gilbert also loved to read and listen to his music. Towards the end of his life his Kindle, his music, and his love for his family kept him young. A devoted son, brother, uncle, husband, father, grandpa, grandpa-gramps and friend . . . he will be missed and will forever live in our hearts. Gilbert is survived by his sister Ora Epinosa, his wife Violet, his children Cissy, Cindy and Manuel, his grandkids Joanne, Ruben and Carol, Bobby and Aimee, Matthew, Casey and Dan, and his great-grand kids Madison, Tessa, Tristan, Eric, Evin and Blake. In lieu of flowers, please consider making a donation to the American Merchant Marine Veterans organization at http://ammv.us/donate-to-ammv.

Gilbert Acebedo was born in Wilmington, California (he called it “God’s Country”) on October 19, 1925 and passed away at the age of 95 years young on January 18, 2021 at Torrance Memorial Hospital in Torrance, California. Gilbert, affectionately... View Obituary & Service Information

The family of Gilbert Acebedo created this Life Tributes page to make it easy to share your memories.

Gilbert Acebedo was born in Wilmington, California (he called...

Send flowers to the Acebedo family.