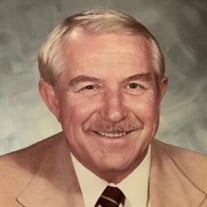 Grant Clayton Logan age 89, passed away peacefully at his Torrance home on April 24, 2021. Grant is preceded in death by his parents, Antone and Helen Logan, wife Sammie, daughter Pamela, son-in-law Boyd Lunsford and granddaughters Nancy, Candie and Birdie Lou Lunsford. He is survived by his son Grant Logan Jr., daughters, Jennifer Nielsen and Nancy Lunsford as well as 7 grandchildren, 12 great grandchildren and 1 great-great grandchild. Grant was born on December 11, 1931 in Elmhurst Illinois and raised in Lombard, Illinois. Besides going to school, Grant became a caddy at the Lombard Golf Course, developing a lifelong passion for golf. He was 15 when his family moved to Carlsbad, New Mexico, where his father owned Logan’s Texaco and the Swan Motel. Grant worked in the filling station while attending Carlsbad High School, excelling in basketball and football. Upon graduation in 1949 he received football scholarship at the University of New Mexico. He married his high school sweetheart Sammie Roberson, and moved to Albuquerque, New Mexico, playing football for 4 years and earning a Bachelor’s Degree in Physical Education, and graduating in 1953. He began his career with the Albuquerque Public Schools as a Physical Education Director at Zia Elementary School, being promoted to assistant principal in 1959. He continued his studies, receiving a Master of Arts degree, School Administration with a minor in Elementary Education in 1961. In 1961, the family moved to Torrance, Ca., where Grant became a teacher at Parkway Elementary School, being promoted to assistant principal in 1964. In 1967 he became principal at Parkway. Over the next 25 years would be a principal at 4 other Torrance elementary schools before retiring in 1992. Grant enjoyed substitute teaching, travelling, hunting, and playing golf. He was very active in the South Bay Christian Church as a Deacon, Elder and Trustee. He was also Director of the Torrance YMCA Y’s Men Club, and served as a board member the for California Retired Teachers Association.

The family of Grant Clayton Logan Sr. created this Life Tributes page to make it easy to share your memories.

Grant Clayton Logan age 89, passed away peacefully at his Torrance...