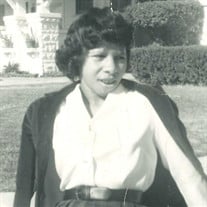 Heronia Hayes known to most as "Tiny" AKA "Little Feisty Woman" was unforgettable. Tiny was honest and unapologetic for it, stern yet loving, frugal yet generous and always stylish. Heronia Hayes was born December 12, 1939 in Washington DC to the late Herman Spriggs Sr. and Laura Gaines. As a young girl, Tiny lived in North Carolina and Atlanta, Georgia, but was raised in Gate City, Virginia her mother's hometown where she completed school and graduated from Douglas High in Kingsport, Tennessee. Heronia moved to Los Angeles, California in 1959 with her mother Laura and step-father Robert Gaines. Soon after settling in the big city, Tiny met and married her husband Robert L. Hayes Jr. From this union they had three children Valerie, Randy, and Vivian. Tiny was never one to sit around doing nothing. She always worked, even holding two jobs at times. On the road to becoming a nurse, she pursued other endeavors, including working at a garment manufacturer, a maintenance company, and the Los Angeles School District. Helping others was part of her nature. Tiny went to work for White Memorial Hospital with her mother, while continuing her nursing education. Tiny received a nursing degree and several other certificates in the health care profession including a certificate for x-ray technology, pre-school audiometric testing, and pre-school vision screening. After leaving White Memorial Hospital, she worked at Convalescent Hospitals and In-Home Care for more than three decades before retiring. After retiring, Tiny remained active. She decided to become a Foster Parent. She ensured that every child who crossed her threshold was safe, healthy, clean, clothed, and well fed. Heronia accepted Christ at an early age and was baptized. Growing up, Church and Sunday School was an absolute must. As an adult, she loved attending Church, singing with Foundation One Choir. Every Wednesday she would pack and distribute food to the homeless at Church. Tiny loved smelling good, listening to music, singing, dancing, playing the piano, sewing and hemming almost everything, dressing (hats and shawls were her signature look), chocolate candy preferably Hershey, peppermint and last but not least Scott tissue, you would never catch her without it. Tiny taught us that life's seemingly small moments aren't really small at all. She leaves behind nothing but a mass of beautiful memories. On Sunday, March 21, 2021, The World lost a beloved mother, Heronia Hayes at age 81. Heronia rejoined her heavenly family and gained her wings. Heronia was preceded in death by her parents Herman Spriggs Sr and Laura Gaines; stepfather Robert Gaines; husband Robert Hayes; Son Randy Hayes; brothers Herman Spriggs Jr and Clifford Benten III; sisters PAtty Gaines and Juanita Lucas; sister in law Len Spriggs. She leaves to cherish her memories two daughters, Valerie Hayes and Vivian (Brian) Clark, daughter in law Denise Hayes, nine grandchildren, Tyshawna, Shawnice, Brian Jr., Ranisha, Brianna, Brooke, Daiviontre, Aniyah, Aaliyah, sister Gee Linda (Orville) Crossfield, sister in law Dedra & Donna of Florida, brother in laws Raymond of Florida and a host of great grandchildren, nieces and nephews, cousins and friends.

Heronia Hayes known to most as "Tiny" AKA "Little Feisty Woman" was unforgettable. Tiny was honest and unapologetic for it, stern yet loving, frugal yet generous and always stylish. Heronia Hayes was born December 12, 1939 in Washington DC... View Obituary & Service Information

The family of Heronia Heyes created this Life Tributes page to make it easy to share your memories.

Heronia Hayes known to most as &quot;Tiny&quot; AKA &quot;Little Feisty Woman&quot;...

Send flowers to the Hayes family.