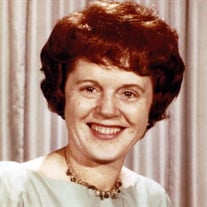 Irene Marion Loose passed away on March 24th, 2022 at the Silverado Memory Care assisted living facility in Redondo Beach, CA. Graveside service will be held on April 7th, 2022 at Green Hills Memorial Park in Rancho Palos Verdes, CA. Irene was born on February 10th, 1922 in Sleepy Eye, MN to Edward Albert Schutt and Zelma Pearl Miner. She grew up there with her 2 brothers Ronald James and Forest (Sandy) Edward, and half-sister Vivian Dorothea attending and graduating from Sleepy Eye Public Schools. At age 18, she married Orville Albert Loose, and they lived on the Loose family farm in Eden Township, Brown Co., MN, where they raised their daughter Dianne Karen. They moved to California in May, 1961 and settled in Lomita, CA where Irene lived for 60 years. She worked for Honeywell, and then for the U.S. Post Office retiring from the USPO after 14 years in 1986. Throughout her time in Lomita, Irene independently supported her family after becoming a widow unexpectedly in 1971. Over the years, she opened her home to her daughter, her brother Ronny, her grandchildren, and her great-grandchildren. She had an active social life, regularly attending church, and Club with her lifelong friend Shirley DiGaetano. She was an animal lover having many pets, enjoyed watching her soap operas every day, and was a sports enthusiast and fan of the LA Lakers and the LA Rams. Irene is pre-deceased by her parents, brothers, sister, husband Orville Loose, daughter Dianne Lee, and granddaughter Donna Yaney. She is survived by her grandson Steven Lee and wife Valerie Lee, son-in-law Bruce Stewart Lee, and great grandchildren Meghan Lee, Madelyn Lee, Trystin Yaney, Ashley Yaney, and Brandon Yaney.

The family of Irene Loose created this Life Tributes page to make it easy to share your memories.

Irene Marion Loose passed away on March 24th, 2022 at the Silverado...

Send flowers to the Loose family.