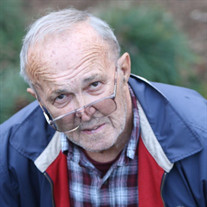 Ivo Rusich, 89, of San Pedro, California passed away on Thursday, December 30, 2021. Born in Veli Drvenik on August 21, 1932, he was the son of Jakov and Jerka Rušić, née Pavić. Ivo endured a grueling childhood during the Second World War, eventually becoming separated from his family. After the war, he spent time in Trogir and Split, attending college in Dubrovnik. Ivo emigrated first to Venezuela in 1959 then in 1964 joined his mother, father and sister in San Pedro, California. In 1966 Ivo married the love of his life, Jasna (Dragovčić) Rusich whom he met in English class in San Pedro Adult School. This union was a lifelong partnership through which they built a strong and loving family, Ivo’s greatest pride. To this union three sons were born: Ivo Jack, Alexander Vladimir, and Jacob Bobby. Ivo worked in the canning plant of the StarKist Cannery on Terminal Island for over 40 years. A devoted father and husband, Ivo took education very seriously. It was of great importance to him to support his sons so that all three may receive a University education. He continued to encourage his grandchildren in this endeavor and was filled with pride to watch them excel in school and life. He was especially honored to see his two eldest granddaughters Ivana and Tatiana graduate from Beckman High School and begin their university studies at SDSU and USC respectively. In his retirement, Ivo became the epitome of a doting grandfather, our Dida. Whether sharing his love of singing traditional songs, showing his methods for gardening and harvesting, or making family gatherings with everyone present a must, he lived passionately as a man who wished to nurture, teach and lead by example so his children and grandchildren could have the best and grow to be their best. Ivo leaves behind his devoted wife of 55 1/2 years, Jasna. He also leaves behind his children Ivo Rusich and his wife Christine Rusich, Alexander Rusich and his wife Bridget Rusich, and Jacob Rusich; four beloved grandchildren Ivana, Tatiana, Alexander and Daniela; and his brother-in-law and sister-in-law Ante and Marija Dragovcic. Ivo is predeceased by his sister Nevenka Edwards. The family of Ivo thanks the staff at Southern California Caregiving of Torrance for the care, compassion, and comfort they provided Ivo and our family in this difficult time. A viewing will be held at Green Hills Memorial Park on Wednesday, January 12th from 4pm-8pm.

The family of Ivo John Rusich created this Life Tributes page to make it easy to share your memories.

Ivo Rusich, 89, of San Pedro, California passed away on Thursday,...

Send flowers to the Rusich family.