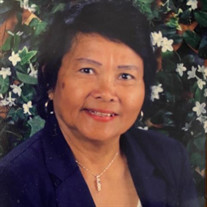 Devoted wife, mother & retired teacher Jacinta Lucas Bareng passed away on March 25, 2022 at the age of 83 after a courageous battle with cancer. Her eternal legacy is celebrated by her loving family and far - reaching circle of friends, and family both here in the US and Laoag, Philippines. On August 15th, 1938 in the small Philippine town of Laoag City, Celedonio & Victorina Lucas welcomed Jacinta Miguel Lucas into the world. She grew up in a loving home surrounded by extended family and nearby family friends. She met neighbor, Hilario Bareng, whom she affectionately called “Honey.” The pair became childhood sweethearts. Jacinta graduated from Ilocos Norte National High School in 1955, going on to earn a teaching degree from Philippine Normal University. She enjoyed a 10-year career as a passionate elementary school teacher. After marrying Hilario in 1971, who had become an enlisted servicemen with the US Navy, their first child Lourdes Maria was born. In 1974, Hilario would later move his family to Honolulu Hawaii where their second child Vernel Angelo would be born. Hilario would go on to serve in several cities both in the US and abroad during which time Jacinta transitioned from teacher to homemaker. Often the sole parent in the household for stretches as long as 6 months as Hilario served on missions in the West Pacific, Jacinta managed the responsibilities of keeping her house in order, raising her two children and working part time. After serving alongside Hilario as a dutiful wife & mother during his 20 plus years of service to this country, Jacinta & the family settled down in Carson, California and eventual retirement. She enjoyed spirited games of mahjong with her “gayem’ (friends), trips to Northern California to visit her grandchildren, and along with Hilario, was a dedicated parishioner at St Philomena Catholic church for over 30 years. In July of the year of Hilario & Jacinta’s 50th Wedding Anniversary, Jacinta was diagnosed with Hodgkins Lymphoma. Afer a valiant 8-month struggle, Jacinta succumbed to the illness. She is survived by her husband, daughter, son, son in law, 2 grandchildren, 4 siblings and extended family in the Philippines. May she eternally rest in peace.

Devoted wife, mother & retired teacher Jacinta Lucas Bareng passed away on March 25, 2022 at the age of 83 after a courageous battle with cancer. Her eternal legacy is celebrated by her loving family and far - reaching circle of friends, and... View Obituary & Service Information

The family of Jacinta Lucas Bareng created this Life Tributes page to make it easy to share your memories.

Send flowers to the Bareng family.