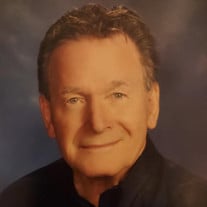 James (Jim) Martin Davenport, 89, of Long Beach, CA, passed away at his home on Thursday November 4, 2021 in the presence of family after a short battle with cancer. He is survived by his loving wife of 69 years Carol Diane (Kidder) Davenport; his three children and their spouses: Randall Davenport (Patricia) of Fountain Valley, CA, Victoria Biery (Raymond) of Arlington, TX and Steven Davenport (Martina) of Lakewood, CA; and five grandchildren: Andrea Sandefer, Raymond Biery IV, Aaron Biery, Andrew Biery and Trevor Davenport plus two step-granddaughters: Pauline Salguero and Naila Salguero. One grandson, Dustin Davenport, preceded Jim in death on July 25, 2020. Jim is also survived by ten great-grandchildren: Payton Sandefer, Bryn Sandefer, Wyatt Biery, Sawyer Biery, Jackson Biery, Cannon Biery, Annalee Biery, Callie Biery, Maya Biery and Brooks Biery. Jim was born on February 10, 1932 to Terry Boston Davenport and Nettie Belle (Pope) Davenport in Little Rock, AR. He was the fifth of six children and the only boy in the family. He is survived by his younger sister, Patty Ann (Davenport) Sims of Escondido, CA and preceded in death by his other four sisters: Lula “Ted” Catherine (Davenport) Fuette, Erma Dean (Davenport) Adelman, Betty Jean (Davenport) McCabe, and Mary Jo (Davenport) Coakley. After spending his early childhood years in Arkansas and Oklahoma, Jim’s family moved to Southern California which he called home for the rest of his days. After Jim graduated from Phineas Banning Senior High School in Wilmington, CA, he began his career as a longshoreman before eventually working for Terminal Insurance Agency, a company that Carol and he owned and operated until they retired at the age of 80. Jim was loved by all who knew him. He was a devoted, loving family man who will leave a lasting legacy for generations to come in his family. He will be most remembered for his friendliness, his sense of humor – especially his one-liners, his mental and physical toughness, his mechanical and construction abilities plus his do-it-yourself approach to numerous projects around the home. He desired to spend quality time with Carol, his children, his grandchildren and his great-grandchildren. For entertainment, Jim loved baseball, especially the Dodgers and he also loved going to Disneyland and to the movies. A Christian in faith, Jim became a believer in Jesus Christ at an early age and was a member of the Presbyterian Church, most recently attending the Good Shepherd Presbyterian Church in Los Alamitos, CA. Memorial services for Jim Davenport are scheduled for Monday November 15, 2021 at 2:00 PM at Green Hills Mortuary & Memorial Chapel located at 27501 S. Western Ave., Rancho Palos Verdes, CA.

James (Jim) Martin Davenport, 89, of Long Beach, CA, passed away at his home on Thursday November 4, 2021 in the presence of family after a short battle with cancer. He is survived by his loving wife of 69 years Carol Diane (Kidder) Davenport;... View Obituary & Service Information

The family of James (Jim) Davenport created this Life Tributes page to make it easy to share your memories.

Send flowers to the Davenport family.