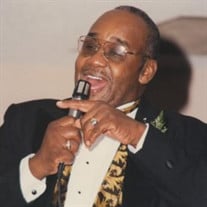 James Todd, the second of three children, was born to Todd and Evelena Davis on May 18, 1934 in Bessemer, Alabama. His sisters, Mary Jean Newby and Evelyn Carol Armstrong, preceded him in death. His family relocated to Detroit Michigan early in his life. He was educated in the Detroit Public Schools system. James worked in the Davis family’s grocery store, Pingree Market. Throughout James’ formative and early adult years in Detroit, he attended St. Stephens A.M.E. Church, serving on the Young Adult Usher Board and singing with the Young Adult Choir. James also sang with the Wings Over Jordan Choir. James served in the United States Air Force during the Korean War years. Part of his experience in the military led to a lifelong passion for travel and engaging people from all walks of life. On October 2, 1960, James married Ethel Jean Brogdon. During July, l96l, James and Ethel moved to Los Angeles, California. James and Ethel were blessed with three sons (Richard Todd, James Allen and Tyrone Hans). In California, James’ home church was Grant A.M.E. Church in Los Angeles. He sang in the Adult Choir for over 40 years. James also sang with the Don Lee White Chorale, the Gospel Ensemble, and the Voices of Inspiration. He never shied away from an opportunity to sing. In addition to various Christian songs and hymns, two of his favorites were “Ole Danny Boy” and “Summertime”. James continued his education and received his Associate of Arts Degree from Compton College as well as completing undergraduate courses at California State University, Dominguez Hills. James took an active part in his community for many years, working with the Boy Scouts of America, Victoria Park basketball program and the Big Brothers Association. Among James’ organizational affiliations were: Veterans of Foreign Wars (Life Member), Toastmasters International, and the International Free and Accepted Modern Masons. James worked for the Los Angeles Unified School District for 31 years prior to retiring in 1993. He worked in a number of other capacities as well. He had a gift and passion as a salesman for many years. James departed from this life on April 23, 2021, leaving to cherish his memory: His wife (Ethel Jean), three sons (Richard, James A. and Tyrone), two daughters-in-law (Barbara and Lydia), six grandchildren (Nicholette, Portia, Richard Ti, Jermaine, Lamar and Danielle), and a host of other relatives and friends. Family and Friends may view James' service at https://OneRoomStreaming.com/ Event Id: Greenhills Password: SQENVU

James Todd, the second of three children, was born to Todd and Evelena Davis on May 18, 1934 in Bessemer, Alabama. His sisters, Mary Jean Newby and Evelyn Carol Armstrong, preceded him in death. His family relocated to Detroit Michigan early... View Obituary & Service Information

The family of James Davis created this Life Tributes page to make it easy to share your memories.

James Todd, the second of three children, was born to Todd and...

Send flowers to the Davis family.