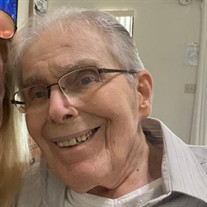 James Marion Gladhill Jr. born November 3rd, 1939 passed away peacefully in his sleep - during an afternoon nap - on October 13, 2021 in Palm Springs, California. He was 81. James grew up in the South Bay and graduated from Mira Costa High School in 1957. His parents are James Marion Gladhill Senior (former Assistant Superintendent of Hermosa Beach City School District in the 1960’s) and Marion Sotaaen Gladhill - both graduates of Mankato State University in Minnesota. As a young boy James spent his days researching antique cars, and dreaming about being in the Navy. Undoubtedly, in his youth, his favorite times were summers spent with his Uncle Theodore Thompson and Aunt Hazel Sotaaen Thompson on their farm near Storden, Minnesota. He thoroughly enjoyed spending time on the family farm and involved himself in its beauty. Oftentimes visiting from Pipestone, Minnesota - upon arrival - James would leap out of the car, stretch out his arms, take a deep breath and exclaim, “I’m Home!” He loved all the workings of the farm. After high school graduation, James joined the United States Navy; here he spent the formative years of his life. Following a tragic accident wherein James sustained a traumatic brain injury he left the Navy under an Honorable Discharge. The Navy was always his one true passion. After rehabilitation from the accident James spent the rest of his years working at St. Andrews Presbyterian Church in Redondo Beach, California. He remained there until his move to Huntington Beach and then Palm Springs. Upon his death he had been living in Assisted Living enjoying facility activities, friendships and Word Searches each day. James is survived by his cousins Geraldine Thompson, Jon Hoffman and Richard Hoffman; brother in law, Robert Harris; niece Deborah Sidler and her children Bryce Sidler and Berit Sidler; nephew Charles Harris, his wife Kathy Harris; nephew Ronald Harris, his wife Beth Harris and their daughter, Rachel Harris; nephew Randy Harris, his wife Sarka Harris and their daughter Ryanne Harris. Services will be held at the interment site on Friday, November 5, 2021 at 2:00 PM at Green Hills Memorial Park in Rancho Palos Verdes. The plot is placed peacefully next to his parents James Gladhill and Marion Sotaeen Gladhill as well as his sister, Jane Gladhill Harris. In lieu of flowers or a memorial gift to the family of James Marion Gladhill please help us Honor our Veterans and First Responders with a donation in his name to Wounded Warriors or Tunnel To Towers. Wounded Warriors - Donations can be made by following the link below: https://support.woundedwarriorproject.org/Default.aspx?tsid=10043 OR sending mail to: Wounded Warriors Project P.O. Box 758516 Topeka, Kansas 66675-8516. Tunnel To Towers - Donations can be made by following the link below: https://dogood.t2t.org/give/320847/#!/donation/checkout OR sending mail to: Tunnel To Towers 2361 Hylan Boulevard Staten Island, New York 10306

James Marion Gladhill Jr. born November 3rd, 1939 passed away peacefully in his sleep - during an afternoon nap - on October 13, 2021 in Palm Springs, California. He was 81. James grew up in the South Bay and graduated from Mira Costa High... View Obituary & Service Information

The family of James Marion Gladhill Jr. created this Life Tributes page to make it easy to share your memories.

Send flowers to the Gladhill family.