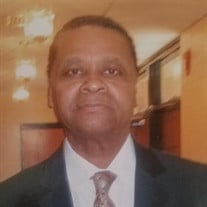 Jesse James Pratt was born on July 11, 1945 to Ola Mae Boxley and Curtis Pratt in Shreveport, Louisiana. He was the third child of four; he was very loving, caring, and protective of his siblings. Jesse attended Booker T. Washington High School, in Shreveport, Louisiana. After his studies, he began his employment at Ford Motor Company. In his early twenties, from a previous relationship, Sonya and Kenneth Edwards were born. At twenty-three years old, one day after work, Jesse went to pay his account at Hemmingway Furniture and this is when his life would change forever. He met the love of his life, Ernestine Gipson. Working as an elevator operator, Jesse fell in love, at first sight and pursued her. Although, it wouldn’t be easy, Ernestine was reluctant to give him her telephone number. “It’s in the telephone book,” she said. As time progressed, Jesse did his research, contacted Ernestine and their courtship began. In 1970, they were married and God blessed them with their first child, Yetta Yvette Pratt in 1971. In 1972, wanting to start a new journey together, they moved to San Pedro, California. By 1976, Ernestine gave birth to their second child, Leslie Deshon Pratt. Jesse loved to protect and serve people, so he started his profession in security. Working several jobs for top companies; such as, Samuel Goldwyn Studios, Kaiser Permanente, Allied Signal, Jessie Lord, and many others. Jesse was an extremely diligent employee and during his employment, if he lost a job to layoffs, he would simply work two jobs, if it was necessary to provide for his family. He never complained. His motto, “In life, if you want nice things, you have to work hard for them.” Jesse continued striving for success. In 1981, Ernestine welcomed their third child, Jekemea Janae Pratt. He loved his daughters deeply. Guiding them over the years, to become strong educated women who would become fearless to society. During the early eighties, Jesse accepted Christ and was baptized, by Pastor Michael Halcrow at Grace Baptist Church, in Wilmington, CA. He later united with Judson Baptist Church in Carson, CA. He loved serving the Lord and Savior. In 2003, Jesse was blessed with the highest paying employment of his career. He worked at PMA, in security cargo for eighteen years. Until he was called home to be with the Lord. Most importantly, Jesse was a man who loved and cherished his family who will miss him dearly. He leaves to cherish his legacy and memory. A devoted wife of fifty years plus, Ernestine G. Pratt, dedicated children Sonya Edwards-Rogers, Kenneth W. Edwards, Yetta Pratt, Leslie Pratt-Totress, Jekemea Pratt-Hargraves, his grandchildren Shadaria N Edwards, Kristopher P. Edwards, Lyric Wesley, Jaelyn and Devin Hargraves, great grandchildren Krystalyn F. Ellis, Khole E. Chandler, Khallie E. Chandler, son-in-laws Wayne Hargraves, Ronald Totress, sister Mary Edwards and brother Melvin Pratt of Shreveport, LA and a host of relatives and friends Curtis Johnson of Shreveport, LA (Los Angeles) William Sargbah of Garden Grove, CA, Mitchell of Longview, TX. and ILWU Local 26. His mother Ola Mae and father Curtis Pratt, sister Curtis Mae Pratt-Lawson, aunt Ora Lee Boxley-Milling, Francis Boxley-Bolt, Bernice Boxley, niece Linda Norwood, cousin Shirley Jack, his grandmothers, grandfathers, uncles, and a host of other relatives who preceded him in death.

Jesse James Pratt was born on July 11, 1945 to Ola Mae Boxley and Curtis Pratt in Shreveport, Louisiana. He was the third child of four; he was very loving, caring, and protective of his siblings. Jesse attended Booker T. Washington High School,... View Obituary & Service Information

The family of Jesse Pratt created this Life Tributes page to make it easy to share your memories.

Send flowers to the Pratt family.