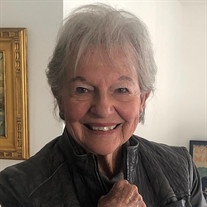 Joan Lucille Junge McGovern, beloved wife, mother and grandmother, passed away peacefully on March 12, 2021 overlooking her beautiful garden. Joan was born on December 18,1929 in Los Angeles and lived the remaining 91 years of her life in California surrounded by her loving family and friends. Joan graduated from Beverly Hills High School in 1947 and from UCLA in 1952 with her teaching credential. She taught second grade until the birth of her children and returned to teaching once the children were attending grade school. Joan made life-long friends everywhere she went, maintaining contact with childhood friends, Alpha Delta Pi sorority sisters, members of The Assistance League Spinnakers, her teacher 'stitchery' group, Sandpipers, members of Mount Olive Lutheran Church and Preschool, as well as neighbors in her Hollywood Riviera and Palos Verdes neighborhoods. Joan met the love of her life in 1951 when a volleyball rolled across her towel at Sorrento Beach in Santa Monica and John McGovern retrieved it to introduce himself. Joan and John married in 1952, and moved to Hawaii for a year while John served on the USS Winston during the Korean War. Joan immersed herself in the lives of her two children, Blair and John, supporting their interests and celebrating their accomplishments. Her garage and cabinets are a treasure trove of Cub Scouts and Brownies memorabilia, Little League and school campaign posters, endless photos, momentos, and more. She was an avid gardener, antique collector and volunteer. She was also a natural athlete, coaching all of her grandchildren to "keep your eye on the ball and follow-through." "To thine own self be true" by William Shakespeare was her favorite quote. Joan is survived by her daughter Blair Ann Contratto (Anthony) of Laguna Beach, son John Edward McGovern of Summerland, and her five accomplished grandchildren, Alexander, Vanessa, Olivia, Miles, and Ainsley. The family would like to thank all the caregivers, physicians, and friends who supported Joan in her final days. A celebration of Joan’s life will be held on March 26, 2021. In lieu of flowers, please make a gift to your favorite charity and know that Joan would support your thoughtfulness. "The time to be happy is now."

Joan Lucille Junge McGovern, beloved wife, mother and grandmother, passed away peacefully on March 12, 2021 overlooking her beautiful garden. Joan was born on December 18,1929 in Los Angeles and lived the remaining 91 years of her life in California... View Obituary & Service Information

The family of Joan Junge McGovern created this Life Tributes page to make it easy to share your memories.

Send flowers to the McGovern family.