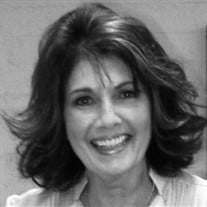 Joanne McQuillen Evans, of Palos Verdes Estates, California, passed away on February 24, 2021, at the age of 89. Joanne was born on February 17,1932, in Pittsburg, Pennsylvania to Betty Crawford and Jack McQuillen. After graduating high school in New Jersey, she went on to earn her degree in Fashion Merchandising. Joanne built her life in New Jersey, where she raised her family. In 1992, she moved to California to be closer to her children and her much anticipated first grandson. While in California, Joanne reconnected with childhood friend and classmate, Clifford Evans, Jr. The couple married in 2006. Throughout Joanne's life, she dedicated her time and talent to volunteer work and fundraising. In New Jersey, she was actively involved with the charities Share and C.A.R.I.H. which raised money for the underprivileged and children in need. Joanne organized very successful events, such as variety shows, dinner dances, and fashion shows. She loved to devise unique ideas, like the time she transformed an abandoned mansion into a magnificent venue for a formal, elegant gala. Once in California, she continued with a serving heart at the Woman's Club of Hermosa Beach, her final association landing with Las Candalistas of Palos Verdes Peninsula. Joanne also had a great love for the theater, music, tap-dancing, and costume design. While living back east, she was involved with several theater groups. She could be seen on stage in various leading roles, but most often held the title of costume designer or producer. Later in life, her talent and passion came in the form of tap dancing. Without a doubt, family was the most important part of Joanne's life. She was an incredible mother, grandmother, and wife because of her loving guidance, encouragement, and support. Joanne's family fondly describes her as a beautiful woman that was thoughtful and cared deeply. She was fun to be around with her quick wit and charm. With such a positive and transcending influence, Joanne was adored and will be greatly missed. Joanne is preceded in death by her father, Jack McQuillen; mother, Betty Crawford; sister, Susie Hughes; and son-in-law, Jim Atterbury. She is survived by her husband, Clifford Evans, Jr; sister, Betsy Traugut of Boston, MA; daughter, Shanda Slocum of Hermosa Beach, CA, her sons Bo and Jack; son-in-law Robert Webber; daughter, Sally Slocum of Hermosa Beach, CA; son, Bradley Slocum and wife Laetitia of Palos Verdes Estates, CA, their sons Cole, Brandon and Luc; son, John Braun and wife Jennifer Simonson of College Station, TX; daughter, Stacy Atterbury of College Station, TX, her family Julie and Patrick Porter, Jason and Kasey Atterbury (Grace and Landon), Brittany and Cale Hand (Lincoln); and a large extended family. Joanne will be laid to rest at Green Hills Mortuary in Rancho Palos Verdes, CA. In lieu of flowers, donations can be made to https://upliftfs.org/get-involved/donate/ Memo: Joanne Evans

Joanne McQuillen Evans, of Palos Verdes Estates, California, passed away on February 24, 2021, at the age of 89. Joanne was born on February 17,1932, in Pittsburg, Pennsylvania to Betty Crawford and Jack McQuillen. After graduating high school... View Obituary & Service Information

In lieu of flowers, donations can be made to https://upliftfs.org/get-involved/donate/ Memo: Joanne Evans

Send flowers to the Evans family.