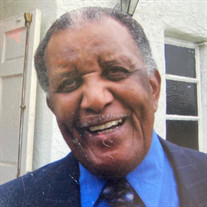 John Henry Fractious was born in Cruger, Mississippi on November 17, 1929 to father Henry Fractious and mother Mayola Mullens Fractious. He was the youngest of four children. The family relocated to Los Angeles, California when John was a young boy. He attended Thomas Jefferson High School where he played trumpet in the School Band and was on the Varsity Basketball team. It was here that he met his wife, Martha Lee Walker. They were married in 1949 and remained together for 61 years until her death in 2010. Two children were produced from this union, Rodney Derrick Fractious and Kimberly Fractious. A hard working Christian man often holding two and three jobs to provide for his family, John was employed by the City of Los Angeles for 40 years. He held numerous positions beginning as a Street Sweeper Operator and advanced to his final managerial position as Street Maintenance Supervisor. John was a member of Bel-vue Community Church for over 60 years, serving as a Sunday School Teacher, Trustee Board member, Elder and Sessions member. Commanding a room with his presence and smile, John was a Master with his hands. He could repair any and everything including cars, bikes, wagons, driveways and fences. He was known to have a magic touch when it came to pulling loose teeth. John enjoyed bowling, hunting, gardening, riding motorcycles, laying concrete, and watching old western movies and television shows. John passed away on Friday, April 29, 2022 at the age of 92. After several years of declining health due to Alzheimers disease, John died peacefully in Redondo Beach California at the home of his daughter and son-in-law. John was preceded in death by his parents, Henry and Mayola Fractious, siblings Pleasant, Pauline and Roscoe Fractious, wife Martha Fractious and son Rodney Fractious. He is survived by his daughter, Kimberly Fractious Young, son-in-law Harding Young, a host of grandchildren, nieces, nephews, extended family and friends. A great storyteller, a great man! Well done John Henry!!

John Henry Fractious was born in Cruger, Mississippi on November 17, 1929 to father Henry Fractious and mother Mayola Mullens Fractious. He was the youngest of four children. The family relocated to Los Angeles, California when John was a young... View Obituary & Service Information

The family of John Henry Fractious created this Life Tributes page to make it easy to share your memories.

John Henry Fractious was born in Cruger, Mississippi on November...

Send flowers to the Fractious family.