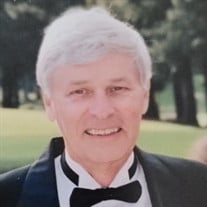 On July 2nd John A. Katherler passed away unexpectedly at age 84 in his home in Carlsbad, CA. John was born in Allegan, MI on September 21st, 1936, to John M. Katherler and Thelma Helen Elsie Katherler. He was the oldest brother to sisters Diane and Sylvia. John lived in Allegan, MI until graduating from Allegan High School in 1955. He then proudly attended the University of Michigan earning a B.S. in aeronautical engineering. After graduating from college in 1959 John moved to Southern California where he started his career in aeronautical engineering. Early in his career John worked for some of the most reputable aeronautical engineering companies in the world, Lockheed, Convair Astronautics, Douglas and Rocketdyne. In 1967 John made his final career move to TRW where he remained for 31 years until his retirement in 1998 working on many notable and historical projects that are found in aeronautical museums today. One of the most notable projects John worked on was the Apollo 13 LEM motor. As was shown in the movie the oxygen tank exploded putting the astronauts at risk of not getting back to earth. John was a key part of the TRW/Grumman technical staff who used that LEM motor to get the crew safely back to Earth. In the fall of 1959 shortly after John graduated from college, he received notice that he was being drafted. He was sworn into the Navy in a Critical Skills Program and completed his service in 1963 with an honorable discharge. Also, in 1963 John married Carol Ann Giveler of Aurora, II. John and Carol lived in Palos Verdes Estates, CA for most of their 50-year marriage. One of John’s proudest achievements was his two daughters Karen and Suzanne. He often shared how happy it made him that Karen and Suzanne not only had the bond of being sisters but beyond sisterhood they are close friends and confidants to one another. John enjoyed cars, golf, and a friendly game of poker. He spent countless hours in the garage rebuilding not one but two vintage Porches. After beautifully renovating the two sports cars John hung up his wrench except for a periodic simple vehicle repair. Golf was a passion for John. While working at TRW John played in many golf tournaments, and in retirement he continued to play twice a week walking the course with close golf friends. For over 5o years John was a member of the Ancient and Honorable Society of Hold-Em or Fold-Em Investment Fraternity which was code for a group of friends that enjoyed monthly poker games. John will be sadly missed and is survived by his daughter Karen Kling, husband Paul Kling, grandchildren Connor and Campbell, daughter Suzanne Wastvedt, husband Michael Wastvedt, granddaughters Lauryn, Ansley and Brooke and his sister Sylvia Pixley. Family and friends are invited to attend a celebration of life ceremony at Green Hills Memorial Park located at 27501 S. Western Ave., Rancho Palos Verdes, CA 90275 on Wednesday June 21st, 2021, at 10:00 am in the little chapel. The Family wishes to thank La Costa Glen Senior Living Community for their amazing staff, services and support which is believed to have given the Family several extra years with John.

On July 2nd John A. Katherler passed away unexpectedly at age 84 in his home in Carlsbad, CA. John was born in Allegan, MI on September 21st, 1936, to John M. Katherler and Thelma Helen Elsie Katherler. He was the oldest brother to sisters... View Obituary & Service Information

The family of John Katherler created this Life Tributes page to make it easy to share your memories.

On July 2nd John A. Katherler passed away unexpectedly at age...

Send flowers to the Katherler family.