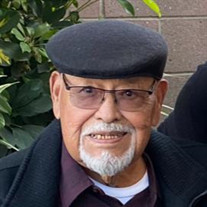 Devoted Husband, Father, Grandfather, Great Grandfather, Friend John was born on August 12th, 1931, in Santa Barbara, California. When he was 3 years old the family moved to Wilmington, California where he became a lifelong resident. At the youthful age of sixteen, he joined the United States Army and served his country during the Korean war. In 1951, he met the love of his life, Esperanza Sedillos. They shared seventy beautiful years together while raising their three daughters Paula (Richard Alcaraz), Rachel (Tony Lopez), Yvonne (Tony Rivas). In 1954 John enrolled in Barber school and was a barber for17years. During his 17years he opened his own barbershop known as 'John's Barber Shop" in Palos Verdes, California. In the late 197o's he closed his shop and began to work at Todd Shipyard as a welder. While working during the day he attended night school to further his welding education. After completion of night school, he received his teaching credentials and worked as a welding teacher at Compton College and Long Beach Trade School. During his working years, John was a certified Welder, Teacher, Barber, Pipe. fitter and Boiler Maker. In 1988, John retired from the Long Beach Naval Shipyard. After retirement, John always kept busy working on cars in his backyard. One of Johns's true passions was music, particularly Mariachi music he celebrated every birthday with a mariachi band and would dance the entire time. We will all cherish John's strong dedication to his family and the wonderful the wisdom he taught us all. family and friends are invited to attend the celebration of life on Thursday, February 10, 2022, at 11:30 am at Green Hills Memorial Park, Rancho Palos Verdes, Ca. Masks are required in the chapel. Services will be livestreamed. Please contact family for the link.

Devoted Husband, Father, Grandfather, Great Grandfather, Friend John was born on August 12th, 1931, in Santa Barbara, California. When he was 3 years old the family moved to Wilmington, California where he became a lifelong resident. At the... View Obituary & Service Information

The family of John Zapata created this Life Tributes page to make it easy to share your memories.

Send flowers to the Zapata family.