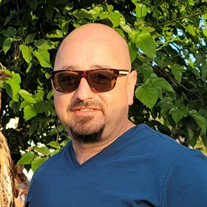 Johnny Carlos Franco was born on February 10, 1974 in Los Angeles, CA to Maria and Guadalupe Franco. He was one of nine children, including brothers Albert, Octavio, Isaac, Samuel, Camilo, Sergio and Rigoberto and sister Irma. As a child, Johnny was a happy boy who loved to run around with his brothers and the local girls around his age. It is said that he had his first girlfriend at the age of 5, as he played with this girl every single day. Johnny was eager to keep up with his older brothers, and was extremely smart and motivated to learn new things, so he was always finding something new to do. He had his first job at 8 years old, walking and feeding a neighbor’s dog. He learned to drive at 10 years old, and coerced his dad to start a cardboard recycling business at about that same age. He worked with his dad every day after school collecting cardboard, and loved every minute of it. Johnny left home for the first time at 14 years old, and went all the way across the country to work in North Carolina. Needless to say, he lived life in the fast lane and was always wise beyond his years. He met his wife Angel in 1997 and after just a few months of dating, he told her that she would have his baby as he knew she was the one. Three months later, she was expecting and they eventually welcomed four beautiful children, Alyssa, Elizabeth, Lauren and his namesake, Johnny. He lived for his wife and kids; they are his greatest accomplishment. He was extremely proud of them and spoiled them in every way he could, by taking them on trips, buying them things and ensuring that they were taken care of. He was an excellent father and provider to them. Johnny and Angel were excitedly planning their vow renewal for August 1, 2022. They had a venue and were planning a big celebration to be able to invite their very large families and numerous friends. Johnny worked at several refineries throughout his adult life, as he was a contractor and moved from place to place. Because of this, he made several friends who have great stories of his work ethic, and playfulness during down time at work. He earned the nickname “the man, the myth, the legend” or “la leyenda” as he was well-respected and admired. He was always the foreman and someone everyone looked up to. He was incredibly helpful and motivating, pushing the others to grow and do their best. Johnny was often seen doing push-ups or pull-ups, and even forcing some of the guys to race him. He had a special yell to get their attention and a bark to notify the others when supervisors were around. He even made skits with the guys, just for laughs… who knew he was an actor. Unlike other guys who spend their free time watching sports, Johnny spent his time checking the stock market, looking for investments, finding great deals on Offer Up, or planning the next family trip with his wife and kids. He was a fun, generous guy who was loved by all who encountered him. He will be greatly missed by his wife and kids, his mother, siblings, nieces and nephews, compadres, in-laws, cousins, friends, co-workers and countless others whose lives he touched. He was welcomed with open arms at the gates of heaven by his idol, his beloved father. The livestreams for the Visitation and Funeral Service can both be accessed on OneRoomStreaming.com using the following log in information Visitation Event ID: Greenhills passcode: 48IJ7V Funeral Event ID: Greenhills passcode: OOSQH3

Johnny Carlos Franco was born on February 10, 1974 in Los Angeles, CA to Maria and Guadalupe Franco. He was one of nine children, including brothers Albert, Octavio, Isaac, Samuel, Camilo, Sergio and Rigoberto and sister Irma. As a child,... View Obituary & Service Information

The family of Johnny Franco created this Life Tributes page to make it easy to share your memories.

Send flowers to the Franco family.