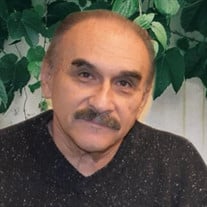 Jorge E. Godoy, 69 years old, born in Merida Yucatan, Mexico on July 13,1951. Was taken unexpectedly on May 29, 2021 due to sepsis. Son of Eduardo Avelino Godoy Trueba and Concepción Ortega Ceballos, oldest of 5 brothers. At 12 years old moved to Broklyn, NY. Was the oldest of 20 cousins from the Godoy and Camara family. About 1970 the family all moved to California. In 1973 he met his wife Maria M. Torres while she was in care of his grandmother Alicia Godoy in Carson, CA. It was love at first sight and after one year dating they were married on June 2, 1974. Resided in Carson where the family grew. He had 3 daughters Concepcion, Veronica, Christina and 3 son in laws Gregorio, Francisco, and Juan, 3 grandchildren Alejandro, Jimmy, and Angelica. He leaves behind his mother, brothers, wife, daughters, grandchildren, aunts, uncles, cousins and beloved friends. He was a great husband, father and caretaker for all of us and always gave life advice. Loved music from James Brown, Santana, Sonora Dinamita, Javier Solis and Selena. Dancing was his way of expressing his joyfulness for family and life. Brought many smiles, laughter, tears to all of us. He made strangers feel like family. He was sarcastic, funny, and could definitely have you believe a lie until it was no longer a joke. We will miss having the rock that kept our family united. He will forever be in our memories and hearts. Funeral Service Mass: June 25, 2021 11:00am-12:00pm St. Margaret Mary Church, 25511 Eshelman Ave, Lomita, Ca 90717 burial immediately following at Green Hills Memorial Park, 27501 S. Western Ave., Rancho Palos Verdes, CA 90275 (Seaview Gravesite) at 12:30pm.

The family of Jorge Godoy created this Life Tributes page to make it easy to share your memories.

Send flowers to the Godoy family.