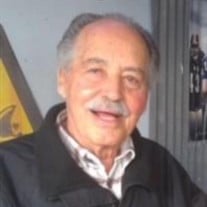 Joseph Angelo DiResta, 97 Joe always rooted for the Yankees and Norte Dame. He loved movies, especially the ones with John Wayne or Humphrey Bogert. Robin Hood and The Three Musketeers rated high on his best movies list. But his two favorites were Gunga Din and Casablanca. In later years he loved reading cowboy books by Louis Lamour. By the time he married, Joe had already lived an eventful and rich lifetime, traveling far and wide during WWII and then for work. He met his future wife while working for North American Aviation’s Apollo program in Downey CA. She noticed he possessed palpable good energy. Just his presence was engaging and he was very family oriented. He adored his siblings, nieces, nephews and cousins back in his hometown of Rockaway Beach, NY. His many lifelong pals there remained steadfast friends throughout their lifetimes. Joe was a joyful, proud and loving Dad. His children adored him. Just being with him seemed to make cares and problems diminish. His heart was generous and soft with kindness and empathy. He loved his brothers-in-law and sisters-in-law too, and he especially loved kidding his mother-in-law. When she would come to visit for a few days, he would say in a slightly complaining tone, “Is my mother-in-law here again?” She so enjoyed that. By the time the children married, he was well into his eighth decade. He welcomed his wonderful son-in-law Geoff and wonderful daughter-in-law Janell into the family. When the first grandchild, Luc arrived, he was overjoyed. As he grew, Joe spent hours teaching him about airplanes and maps. Luc tried to teach Grandpa about the operation of an iPad. Just never quite caught on… In his ninth decade he welcomed two more adorable grandchildren, Eli and Elouise. So grateful was he to be able to share such sweet times with them all, for the rest of his days. When his vitality ebbed, the Lord provided the best caregivers there could be. Tiny, Kat, Marcos, Paolo and other wonderful nurses took great care of him. He looked forward to their visits and appreciated them so much. He was the same Joe, only frail. His last day was remarkable. It was Veteran’s Day and he enjoyed patriotic movies on television. He talked about WWII and conversed in his friendly, sweet way. How could we know that when he took his afternoon nap, he would slip away …I am sure in the company of angels. Joe is survived by wife, Mary; daughter, Tara Webb (Geoffrey); son, Joseph (Janell); grandchildren, Luc Webb, Eli DiResta, Elouise DiResta; sister, Connie Cacciabaudo; nephews, Michael and John Panzone, Richard and Joel DiResta, Chris DeMent; nieces, Donna Travers, Barbara Gardyn; brother-in-law, Cameron Long, sister-in-law Gloria DeMent and numerous well-loved extended family members and friends. Joe was pre-deceased by brother, Jerry DiResta; sister, Carmela Panzone; brother-in-law, Chuck DeMent. May God Bless Joseph Angelo DiResta: peacemaker, patriot, and faithful servant.

Joseph Angelo DiResta, 97 Joe always rooted for the Yankees and Norte Dame. He loved movies, especially the ones with John Wayne or Humphrey Bogert. Robin Hood and The Three Musketeers rated high on his best movies list. But his two favorites... View Obituary & Service Information

The family of Joseph DiResta created this Life Tributes page to make it easy to share your memories.

Joe always rooted for the Yankees...

Send flowers to the DiResta family.