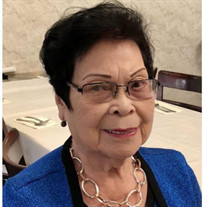 Our beloved Mom, Juana Quezon Santiago, passed away on Saturday, February 5, 2022. A devoted Wife, Mom and Grandma, she was immensely proud of her family, and especially doted on her children and grandchildren. Juana was born in the Philippines, in the province of Bohol, on October 20, 1933 to Sabino and Maria Quezon (nee Dalomias). She was one of 9 siblings who grew up in a tight close-knit family. She moved from her hometown of Dauis to the big city of Manila, where she lived with her eldest sister and her family. After studying at the University of Santo Tomas, she worked at Inhelder Laboratories, where she met an engineer named Daniel Santiago, and they got married not long after. Danny and Aning, as she was affectionately known, built a wonderful life together with their children, first in Mandaluyong, then in Paranaque where they eventually bought their house in Moonwalk. The entire family eventually immigrated to Southern California in the United States. Aning unconditionally loved her children Stella, Bong, Sandy and Dennis, and unabashedly spoiled her grandchildren David, Dominic and Dustin. Her language of love was service. She made sure all her children’s needs were always met, constantly prepared for them the most scrumptious food, and lavished them with little gifts and money, even when they were already full-grown adults. Aning was also beloved by her siblings, especially her sisters Conching, Inday, Daling and Pat. To her nieces and nephews, Tia Aning was a fun, vivacious Aunt, conspiring with them in their earlier escapades, and later on, becoming a ready confidant they can run to for a listening ear and sage advice. Aning was the most generous, loving and compassionate spirit. She was most passionate about giving her children the best life they deserved. She was all about Life, Family, and Giving.

Our beloved Mom, Juana Quezon Santiago, passed away on Saturday, February 5, 2022. A devoted Wife, Mom and Grandma, she was immensely proud of her family, and especially doted on her children and grandchildren. Juana was born in the Philippines,... View Obituary & Service Information

The family of Juana Q Santiago created this Life Tributes page to make it easy to share your memories.

Our beloved Mom, Juana Quezon Santiago, passed away on Saturday,...

Send flowers to the Santiago family.