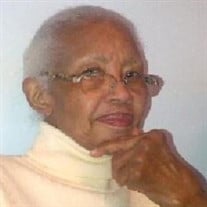 Mother Juanita I Rucker, was born in Pittsview, Alabama on November 6, 1938, to George and Mandy Ivey, they both proceeded her in death. She was the 4th child of 8 children. She was saved at an early age at Antioch Baptist Church where she “got her religion praying on the mourning bench.” Juanita was taught by her parents the importance of having a relationship with Jesus Christ, that faith gave her the power to carry on. She was married to Jimmy Allison and moved to East Chicago, Illinois. Two children were born to this union, Birdie and Robert Allison. A few years into the marriage they were divorce and Juanita moved to Cleveland Ohio, and her children went to live with her parents. Juanita worked as a live-in governess to a wealthy family, whose daughter didn’t’ speak. Juanita would take the young girl for long walks, to the park, read to her and sit with her at meals. Juanita love spending time with her. Her parents were doctors and spent most of their time at the hospital. In time the young girl started to speak. Her parents thought she had a learning disability, but all she needed was someone to care. Juanita has always treasured that part of her life. She later meet and married Benjamin F. Rucker in 1964. They were married at The Greater Abyssinia Baptist Church in Cleveland Ohio and became faithful members. He had 3 children from his previous marriage, Bonnie, Jerome(deceased) and Beverly(deceased). Benjamin and Juanita were married for 34yrs, until Benjamin’s death in July 1999. Juanita started working at Suburban Pavilion Nursing Home, as a Nurse’s Aide. She had several positions during her 30 years of employment. She was a Buyer, a Union Rep. and retired as a Physical Therapist. Juanita was very dedicated to her patients and highly disciplined at work. Her co-workers were amazed at how she never missed a day or was late, she punched the clock every day at 6:59 a.m., carried the same lunch of a sandwich, banana, 3 cookies and a Pepsi. Juanita departed her earthly home on February 26, 2021 at UCLA Harbor Medical Center. She leaves a life of precious memories to her loving daughter, Birdie Brown, son-in-law Kelvin Brown, son Robert Allison (deceased) and Grandchildren Kayla Brown, William Paul, Antoine & Ebony Brand, Brittany, Devyn & Louis Rucker. Brothers & Sisters, Jessie Woolfolk (deceased), George Ivey Jr.(deceased), Eugene Ivey, Patricia (Willie) Johnson, Frank (Christine) Ivey, Shirley Hodge (deceased), Betty Tyner (deceased), and cherished cousins, nephews, nieces, great-grandchildren & friends. The late Bishop John F. Morris of I.A.M Church & members and her former pastor Rev. E.T Caviness of The Greater Abyssinia Baptist Church, #1 Usher Board & members in Cleveland Ohio.

Mother Juanita I Rucker, was born in Pittsview, Alabama on November 6, 1938, to George and Mandy Ivey, they both proceeded her in death. She was the 4th child of 8 children. She was saved at an early age at Antioch Baptist Church where she... View Obituary & Service Information

The family of Juanita Rucker created this Life Tributes page to make it easy to share your memories.

Mother Juanita I Rucker, was born in Pittsview, Alabama on November...

Send flowers to the Rucker family.