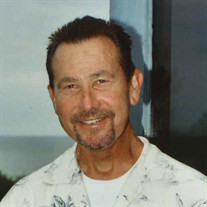 It is with a devastating heart to announce the loss of Larry Pedersen, who recently passed away from Respiratory and Heart failure due to other underlying health issues. Larry was a true "Pedro Boy", meaning born, raised, and currently resided in San Pedro, until his death. He was born in the original San Pedro Hospital brick building, attended Point Fermin Elementary, Dana Jr High, and San Pedro High School, graduating in Summer 70'. In his prime, Larry was an avid weight lifter. In those days, working out was not common. Every day except for Sundays, at 4am he went down to the Cabrillo Beach weight room and worked out with his buddies. At 230 pounds he was solid muscle. Neighbors would tease him and call him "Mr. Cabrillo Beach". He was the gentle giant. He owned and operated Nordic Gardening service for 30 years. For the last 12 years before he retired, he was known in San Pedro as "The Gardener with the dog". His beloved Molly went to work everyday with him. He would laugh and tell people that Molly was actually the supervisor and he was just an employee. Larry was a true friend to all that knew him. His comedic personality was his special charm. He could take a situation and dramatize it in such a fashion, that would just crack you up. To his friends, he was the nicest and easiest going guy they knew. He would do anything' for his friends or family when asked. Larry's enjoyment was to be around his friends or family and of course with a few beers. Loved his Budweiser. He loved when his niece Michelle would throw a BBQ and she would make "Jell-0 Shooters". What a good time he always had. Larry leaves behind his wife Terrie of 40 years, where they met at Cabrillo Beach. He was playing Volleyball and that was the beginning of a love that lasted forever. He was constantly teased by friends that he was a cradle robber, as Terrie was only 16 at the time and he was 21. Larry survived Lymphoma cancer 3 separate times in his life and somehow always got back on his feet. Since his family was from Viking descent, he was considered a Nordic Warrior, that never gave up. Larry is preceded in death by his parents, Bill and Vera Pedersen. He is survived by his wife Terrie, sister Judi Woodford, Michelle Juarez (Nelson) his nieces, Briana, Natalie and Andrea and of course, his beloved Molly too. Funeral services will be Sat December 12th at 12noon. There is a limited capacity due to COVID. A celebration of life, will be at a later date.

It is with a devastating heart to announce the loss of Larry Pedersen, who recently passed away from Respiratory and Heart failure due to other underlying health issues. Larry was a true "Pedro Boy", meaning born, raised, and currently resided... View Obituary & Service Information

The family of Larry Eugene Pedersen created this Life Tributes page to make it easy to share your memories.

It is with a devastating heart to announce the loss of Larry
Pedersen,...

Send flowers to the Pedersen family.