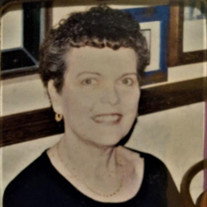 Laura “Joan” Cranmer (Davis) was born on the island of Bermuda on December 11, 1931, and passed February 28, 2022, in Santa Rosa CA. Born to Edmond and Imogene Davis, she is survived by her 3 children: her daughter Laura Hanki (Curtis), her sons David and Robert (Vicky). She was preceded in death by her beloved husband of 65 years Frank Cranmer as well as her five brothers and one sister. Joan met Frank while he was stationed in Bermuda with the United States Air Force in 1951 and they were married in Bermuda in 1952. They moved to California, first to Grass Valley CA, Franks hometown, and then settled in San Pedro in 1954 where they raised their three children. She is also survived by her loving grandchildren Erin Hanki, Melanie Hanki, Christopher Raday, Jennifer Smith, Kayla Cranmer, Ana Prado, Richard Cranmer, Ashley Cranmer as well as six great grandchildren. Joan had a long-distinguished career as a Legal Secretary for over 50 years throughout the San Pedro and Harbor area, most notably for attorneys George and Michael Stephenson. Joan loved nothing more than supporting her children in Little league, High Schools sports, Campfire Girls and Boy Scouts and then later in life dotting on her grandchildren and great grandchildren. Services will be held Monday March 28,.2022 at, at Green Hills Mortuary and Historic Chapel, 27501 S. Western Ave, Rancho Palos Verdes, CA 90271 at 10 AM.

The family of Laura Joan Cranmer created this Life Tributes page to make it easy to share your memories.

Laura “Joan” Cranmer (Davis) was born on the island of Bermuda...

Send flowers to the Cranmer family.