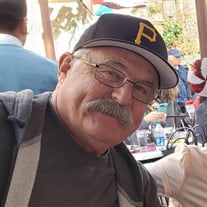 Survived by wife Eileen, daughter Bianca her husband Nick, granddaughters, Brooke & Ava, and Nephew Chris Califano, brother Larry and his wife Nancy. Lee was born December 12, 1949 in Santa Ana, California to Violet and Frank Morgan. His parents moved to Villa Park where Lee went to school and graduated from Villa Park High School. Lee was an athlete with 2 memorials at the school where he achieved Most Valuable Player in Baseball and Football in his senior year. Lee was scouted at this time by the White Sox. (He never told anyone but Eileen did) He never bragged about himself. Lee was a humble man. After College Lee enlisted into the United States Navy and served his country during the Vietnam War. He knew the exact number of servicemen, 55,220 who died and didn't get to return home. He was a proud and patriotic man. After the war, Lee went to work for the Long Beach Naval Shipyard. He worked as a Boilermaker, Boiler Inspector, Boilermaker Foreman for 25 years. Lee was known to his coworkers as the gentle giant. He was very respected at the shipyard and received many awards for outstanding performance. There he met his wife, Eileen. They met on board the USS Gridley, where both were working. They fell in love and were married. Lee and Eileen have a daughter, Bianca; the apple of his eye. After the shipyard closed Lee went to work as a Longshoreman. He worked for ILWU Local 13 for 20 years. Lee retired January 1, 2018. During his retirement Lee and Eileen traveled to Hawaii, Alaska, Spain, France, Croatia and Italy. He loved seeing especially the Island where his wife's family was from, Ischia. Every year for the last several, Lee enjoyed a week in Catalina with his family. He loved the beaches and was himself an old long board surfer from OC. Every summer they would go to Belmont Shore on Mondays and Fridays and spend the entire day with "Uncle Larry". There he showed Brooke how to paddle board and took walks on the beach with her. Ava, Lee's other granddaughter, would dance for him showing her all her ballet talents. Oh, how he loved those two granddaughters. Every year Lee would take his beautiful daughter, Bianca to a Dodger game (which he did not like at all). But he would take her because Bianca was a Dodger Fan. He always cheered for the other team though. Lee took great pride in his family and his home. He would keep their pool so clean and loved gardening in their back yard. You never had to tell him to do this or do that; he just would do whatever needed to be done without complaining. Lee loved his sister-in-law, Dee Dee and her husband Tony; they were great travel buddies. Lee loved going to his brother in law's home, Phillip & Lisa, for a nice dinner and cocktail. His brother-in-law Pat was Lee's best man at their wedding and so enjoyed many evenings with Pat & Irene. Another rother-in-law Johnny was also one of Lee's favorites; along with Johnny's wife Lien going out to dinners from time to time. Along with all his nieces, nephews and close family friends Lee would say how blessed he is to have a big family. How he loved our Morgan Christmas' with his brother Larry, wife Nancy, Niece Michaela and great nephews Alec and Ace. He loved his family that's for sure. Lee loved riding his Harley and would join some of Eileen's friends who soon became his friends, Victor, Raymond, and Ernie. They would take day trips to various places. One favorite for all of them was riding down to Corona to Tom's Farm. These friends, who were somewhat younger, out of respect addressed him as Mr. Lee. His good buddies were Bobby and Kathy; Lee loved spending time with them. They shared many dinners together and quite a few outings. Lee was a really nice guy who had the highest respect for his wife, daughter, granddaughters, son in law and his nephew who he raised from the time he was 5 years old. Lee was an honorable man with the highest integrity. A Patriot who loved his country and fought for our freedoms. May you Rest in Peace Lee, our gentle giant. Lee's Services will be October 13, 2021 @ 10:30 AM Green Hills Cemetery at the Lakeside Memorial In lieu of flowers please consider making a donation to the VFW.

The family of Mr. Lee Morgan created this Life Tributes page to make it easy to share your memories.

Send flowers to the Morgan family.