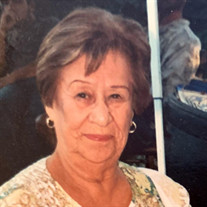 Lupe Gonzales, who lived in and around the La Rambla area of San Pedro for decades, passed away on November 23, 2020 at age 88. Lupe was born December 18, 1931 in Lomita to Juan Fernandez and Maria Macias. The family moved to San Pedro, where Lupe attended San Pedro High School. She married La Rambla native Edward “Ray” Gonzales on June 12, 1953. Together they raised their three sons John Fernandez and Eddie and Jimmy Gonzales. In the earlier years of their marriage the family lived on the 1400 block of Second Street and at Second and Hanford. Lupe and Ray also lived on Santa Cruz and Sepulveda streets, as well as a number of years in Wilmington, where Lupe and Ray lived the last several years of their lives. A homemaker most of her life, she also worked about six years for toymaker Mattel Inc. in Torrance. Ray and Lupe often traveled and went camping with family members, creating many memories for themselves and their loved ones. A devoted mother with a big smile, she was happiest when her family gathered together for her home cooking. She and Ray had been married for 53 years at the time of his death on August 11, 2006. In addition to her three sons, survivors include grandchildren Joey Gonzales, Jessica Martinez, Kara Gonzales Musick, and Daniel Fernandez; and great-grandchildren Adeline, Abigail, Oliver, and another little girl on the way. Lupe is also survived by her five sisters; Esther Rivas, Lila DeLaTorre, Norma Hernandez, Gloria Suggs and Aurora Vergne and two brothers; Alfredo and Salvador Fernandez. Services are set for Wednesday, December 2, 2020 at 11:30 a.m. in the Pavilion at Green Hills Memorial Park in Rancho Palos Verdes. As part of Covid-19 restrictions, physical distancing and masks are required, and an 80-person limit is in place. Those who were touched by Lupe’s life are invited to watch the live stream of Lupe’s service on December 2, 2020 at 11:30AM. The link to virtually attend his tribute is https://client.tribucast.com/tcid/18708349

Lupe Gonzales, who lived in and around the La Rambla area of San Pedro for decades, passed away on November 23, 2020 at age 88. Lupe was born December 18, 1931 in Lomita to Juan Fernandez and Maria Macias. The family moved to San Pedro, where... View Obituary & Service Information

The family of Lupe Gonzales created this Life Tributes page to make it easy to share your memories.

Lupe Gonzales, who lived in and around the La Rambla area of...

Send flowers to the Gonzales family.